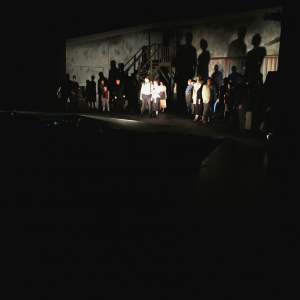 The razor is put away, the pie shop is closed, but there’s still one last part of the SWEENEY tale to tell. If you’ve been following this blog over the last few months, you will remember the Secret Encourager (or Secret Sweeney as it’s fondly referred to by the cast) program where all of the cast members were secretly surprising each other with encouraging notes or gifts as a way to lift one another’s spirits and cheer each other on. On Sunday after the final performance, cast members revealed their secret identities. I asked a few of them to share with me what this experience has been like for them, what it has meant to be a secret encourager, and how it has helped them to be encouraged by someone else.

Ensemble member Shawn Jones really enjoyed being an encourager. His secret encouragee was AJ Wiewel (Ensemble). Shawn got really creative and bought AJ a small Zen garden water fountain; but instead of just leaving it for him, he sent him on a treasure hunt all through the theater to find it. “It was fun watching him go here and there not knowing I was watching him hunt his gift down as well as him not knowing it was from me – that was the greatest fulfillment.” Shawn also had the complete surprise of finding out that SWEENEY TODD himself (J.E. Frohn) was his secret encourager. “He not only left me nice encouraging notes that made me smile, he also constantly encouraged me and complimented me on a daily basis.”

Devin Rohr (Ensemble) shared how his first note had tiny typewriter font. “I loved the simplicity and old school use of a typewriter that created an allure.” After a few more notes he started trying to figure out who his encourager was. “I began building my list of suspects, but I was way off the whole time.” He was leaning pretty heavily towards Gretchen Wolfmeyer (Mrs. Lovett), but had a few other suspects as well. He says it all started making sense when he got his last gift: Power Rangers Movie, a bag of M&M’s, a QCT anniversary coffee mug, and some little bottles of airplane booze. His Secret Encourager, Drew Quintero (Pirelli), still had to reveal his identity at the end before Devin was sure. “He was the best Secret Sweeney. His messages were inspiring, motivating and really helped to give me a pick-me-up on days where I was feeling less than great. I think that this process should be used for any show!”

Gretchen Wolfmeyer, QCT’s own Mrs. Lovett, was Drew’s secret encourager. She recalls, “Even though I was extremely busy trying to balance work, family, and everything I had to learn for the show, it was fun to take a few minutes out of my day and write a quick note or print off a silly encouraging picture that related.” For opening night, she found a miniature Pirelli coin purse and filled it with Pirelli’s own encouraging lyrics. Since they’re both foodies, she enjoyed giving him fun food gifts and ended the run with a special celebratory beverage. Even though Gretchen was sure Drew was on to her, he was surprised to find out that she was his secret encourager.

Gretchen also told me about her secret encourager, Mason Ellison (Jonas Fogg, Ensemble): “My secret encourager sent notes to me at just the right time within the production. I had so much weight on my shoulders with this show, and I really needed that additional support. Thoughts of self-doubt started to creep in as we put each act of the show together. I needed all the help I could get to just keep going. Those notes were a huge blessing.”

All of the cast members agree that the Secret Encouragers was a great success. Several commented that it was particularly helpful when working on a darker show such as SWEENEY, but they all hope this will continue in other shows to become a great tradition at QCT.

The Music Tells the Tale>>