Skip to content
Home » Blog » A Light in the Dark

A Light in the Dark 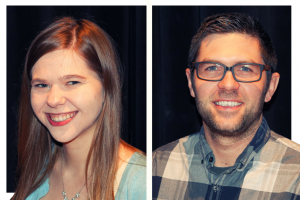 One of the bright spots in the tale of SWEENEY TODD is the story of Anthony and Johanna. Johanna is the daughter of Sweeney Todd, and Anthony is the sailor who rescued Sweeney and helped him return to London. It’s love at first sight for Anthony who vows to rescue Johanna from the asylum where she has been imprisoned.

Johanna is played by Emily Dozier, a long-time member of QCT.  She first started taking classes in the 90’s and her first Main Stage show was in 2004. She’s always wanted to play Johanna, so this is a particularly exciting opportunity for her. Aaron Speckhart, who plays Anthony, is a relative newcomer to the theatre. His first role with QCT was that of King Arthur in CAMELOT last year.

I caught up with Aaron and Emily at rehearsal the other evening and asked them about what attracted them to their characters, what their biggest challenges are, and how Anthony and Johanna can provide connection to the greater human experience.

Emily told me that she finds the depth of Johanna’s character to be very appealing. “It’s not one of those fluffy roles where she just looks pretty. I think there’s so many layers and she’s gone through so much that makes it really interesting.” Aaron was drawn to Anthony’s songs. The song “Johanna” was actually his audition song, so he’s been attracted to the music from the beginning.  Aaron likes that Anthony is young and optimistic. “He’s the kind of person you’d like to be around.  He fights for what’s right, no matter what. He does get corrupted a little bit, but he’s a good guy.”

Aaron and Emily agree that one of the biggest challenges they’ve faced is the timing of the music. Some of the rhythms are particularly quick and difficult and have required quite a bit of practice. Additionally, Emily shared that the roles themselves can be challenging. “What attracted me to the role is also what’s hardest about the role – connecting on that emotional level to the character. The stakes are very high because she’s gone through a lot of terrible things, so how do you as an actor come to terms with that and play that and portray that on stage?”

Aaron told me that the darkness of the story can be a “tough pill to swallow at times, but if you look beyond the surface level stuff, people can relate to almost all of the characters. They just don’t take it to these extremes. Anthony is the person I’d want to be like – always willing to do the right thing all of the time.” He also talked about how important Anthony is to the story because he’s someone you can root for. He’s a positive force in the midst of a story that holds a lot of negativity. Emily observes that Johanna is in a cage, both physically and mentally: “Physically, she’s under Judge Turpin’s watch and not allowed to leave, but mentally, which I think a lot of people can relate to,  she just has this fear that’s trapping her. I think a lot of people, whether it’s something at work, or something in their personal lives, have something they’re insecure about.”