Skip to content
Home » Blog » The Ingredients of a Show

The Ingredients of a Show

If you stop by QCT this week, you’ll likely find every corner busy with preparations for SWEENEY TODD which opens next week. It literally takes a community to produce any show and SWEENEY is no exception. There are twenty-seven actors in the show, six of whom are new to QCT, and countless volunteers who help to bring it all together. I was there last night and spent some time wandering around to see what everyone was up to.

I could hear a vocal rehearsal somewhere nearby, and hammering coming from the scene shop. Cast members were rehearsing lines and songs together in small groups in the halls before their turn to go on stage. I caught a glimpse of Sweeney himself, sharpening his lines backstage. Speaking of rehearsal, Artistic Director Brandon Thomsen estimates that the cast has spent around 200 hours in rehearsal, which seems only reasonable when the script is 150 pages and contains approximately 24,000 words.

In the rehearsal hall, I found Production Manager Kelsey Pigg working on a photo shoot with Johanna (played by Emily Dozier). The photos will be used to produce upcoming promotional information for the show. 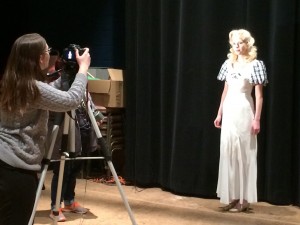 Volunteer Doris Sanders has spent her time working on props. She told me (as she was adding trim to a pillow used in one of the scenes) that there are at least 100 props in the show, and they’re still adding new ones every day. 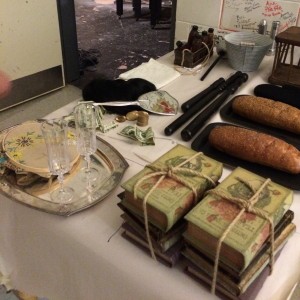 The scene shop has been a really busy place lately. Danny White, Assistant Technical Director has been working on the set full time since early February. Volunteer Nick Hommowun has been working with him since the beginning and four more volunteers have joined the effort in the last few weeks. The most unique set features are the barber’s chair…

and the trap door where Sweeney disposes of his victims… 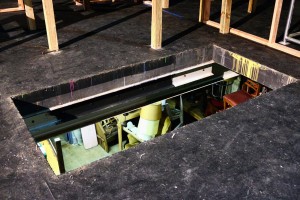 Danny told me that the trap door was the most challenging build on the set because it needed to be functional, but also safe for the actors to walk on when not in use.

The costume shop, where I enjoy volunteering my time, is also a busy place these days. If you stop by on a given evening you’ll likely find cast members in and out for fittings, costumes hung on custom body forms receiving finishing touches, and sewing machines humming. Costume Designer Janaé Lafleur manages the work of the volunteers (three (3) regular volunteers and four (4) more who are helping on and off just for SWEENEY) as well as her own projects. There are about 46 costumes in all for SWEENEY. Janaé estimates she has spent over 10 hours on Johanna’s dress alone. Last night there were three sewing machines going at once as volunteer Jim Rupp (who is also playing Judge Turpin, and who has also been working on the set) constructed an apron, Janaé put some hem details on a dress, and I finished a pair of pajamas – all for Mrs. Lovett. 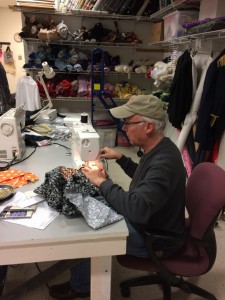 The Beggar Woman’s costume is one of the more unique pieces with lots of little details and distressing that Jim spent several hours working on. Janaé is also working on a custom hand-made wig for the Beggar Woman, which has so far taken about five (5) hours and she’s only about a quarter of the way complete. Accessories are important in the costume shop too, as one can clearly see in the masquerade masks painted and decorated by Elizabeth Mannhardt, who estimates she has spent 11+ hours on the project. 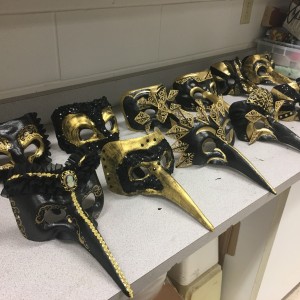 The stage is almost set. Everyone is working hard to prepare to welcome you to the world of SWEENEY TODD. Make sure you have a seat. Attend the Tale! 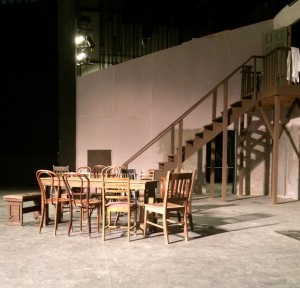