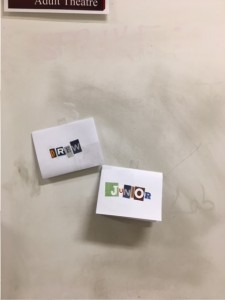 A few weeks ago, I visited with Artistic Director Brandon Thomsen about why he wanted to bring Sweeney to QCT and his perspectives on the show, the story, and the deeper meaning. You can read that blog post here: Why Sweeney. In that same conversation, we also talked about how the cast is approaching the story of Sweeney Todd.

The dark vengeful tone of Sweeney Todd is essential to the story. As the actors started learning their roles, a lot of discussion was put into the importance of being respectful to each other as the cast took on the various roles of the show. “There are just terrible circumstances that happen to the characters in the show,” Thomsen told me. “We have to create a space where our actors feel comfortable exposing themselves and going there. We can never make light of the circumstances that they’re portraying.”

When the cast first sat down to discuss what it meant to be Sweeney, it was important to make sure that they were all on the same page about the story they were trying to tell. There was discussion around the idea that one of the lessons of the show is the importance of practicing forgiveness. Thomsen emphasized that they needed to be “ambassadors of this piece. If the show is really about how one should practice forgiveness and look out for other people, we need to do that ourselves.” It’s easy to point out another’s faults, or lash out at someone who we feel has wronged us, but in doing so, we’re doing what we’re accusing others of doing. Thomsen challenged the cast to ask themselves “what are WE doing” and take personal responsibility for how they treat others.

One way Thomsen is working to keep rehearsals positive is to implement a new “Secret Encourager” program for any members of the cast who wish to participate. The idea is similar to a Secret Santa where cast members can anonymously send encouraging notes or small gifts to a cast member. Once the show opens, these “Secret Encouragers” will reveal themselves to their designated cast member. It’s a practical way the cast can make the deeper meaning of Sweeney an action and not just an idea. Each cast member knows there’s always someone who is secretly looking out for them and helping to create a positive environment and experience.