Skip to content
Home » Blog » The Music Tells the Tale

The Music Tells the Tale 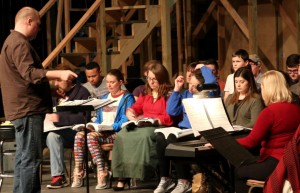 Over the course of the last few months, this blog has explored various aspects of the story of SWEENEY TODD, and while I have touched a few times on the music of the show, it seems fitting for the music of SWEENEY to get its own post the week we open the show (coincidentally also the week of composer Stephen Sondheim’s birthday). I had a chance to attend a few rehearsals last week and experience a few of the wonderful pieces from the show. I also sat down with the show’s Music Director, Scott Schoonover to get his thoughts and perspective on what makes this music so special.

The Founder and Artistic Director of Union Avenue Opera in St. Louis, Scott has served as conductor for more than 50 productions over the last 21 years. He has also conducted for several other companies including the Asheville Lyric Opera, Winter Opera Saint Louis, and the Muddy River Opera in Quincy, and he regularly conducts Webster Opera Studio performances at Webster University. He is also active as a choral conductor, serving as the Artistic Director and Conductor of the Missouri Women’s Chorus and the Director of Music at Union Avenue Christian Church in St. Louis.

Scott told me that while he’s never done SWEENEY TODD before, he’s always wanted to. He has conducted INTO THE WOODS, another Sondheim show, and really enjoyed it. He notes that SWEENEY is a particularly hard show musically, but he is very excited to be directing SWEENEY. As he has worked to bring the music together for the show, he’s developed an even greater appreciation for SWEENEY and is glad to know the show better than he did before.

“One of the things I like about it and that I think the audience will like about it is that there are a lot of different styles of music.” A lot of the music is just talking, but there are also extended arias and beautiful love songs, such as the song “Johanna.” “Then we see the ‘Johanna’ song morph into this wonderful quartet a little bit later on when Sweeney brings his music, Johanna brings her music and Anthony is still singing Johanna, and then the beggar lady comes in in the middle of it with her own music. It takes all these four different types of music and weaves them into this one quartet that forms the centerpiece of the second act. There are songs like ‘A Little Priest,’ which is like a vaudeville number, it’s got all these jokes, which I just think is really fun.” Then there are big chorus numbers and the ‘Ballad of Sweeney Todd,’ which is reminiscent of an Irish Folk tune, and runs through the whole show, where the chorus comes out and breaks the wall and talks to the audience about what is going on.

“One of the things I like so much about the music is how Sondheim is so good at creating the drama with the orchestra part. When a character is angry, the music underneath is angry. It amplifies whatever is going on. Not every musical has a composer like Sondheim who is really thinking psychologically about what the person is thinking and how that comes out of their mouth.” In his composing, Sondheim wanted to create the feeling of an old-fashioned horror movie, and used several related elements, such as the sound of creepy organ music throughout the show.

The nine-person orchestra has been busy rehearsing with challenging rhythms and crazy key signatures. Because the music never really stops in Sweeney, the orchestra doesn’t stop, which is especially challenging for them. The first act has eighteen (18) songs and the second act has eleven (11) songs.

The music of SWEENEY is truly the heart of the show, and the cast and orchestra can’t wait to share it with you. See you there!