I have been volunteering in the costume shop at QCT since August, and years before that I worked for a small ballet company in their costume shop, so it should come as no surprise that costumes are one of my favorite aspects of the theatre world. Whether it’s an old costume being reconfigured or an entirely new costume being created, each one represents the vision and concept of the Artistic Director that is captured, visualized, and created by the Costume Designer. As QCT gears up for Sweeney Todd, I sat down with Janaé Lafleur, Costume Designer, to discuss her approach to designing and creating the look of the costumes for the show.

Sweeney Todd is originally set in London during the Industrial Revolution, so the original concept and direction from Artistic Director Brandon Thomsen was for the costumes to be Victorian. However, as Thomsen researched and developed his concept of the show he found himself leaning more towards a “creepy basement, Alfred Hitchcock, film noir” concept which prompted him to set the show in the 1930’s instead. The 1930’s in England were known as the Great Depression in the United Kingdom, also known as The Great Slump and was a period of national economic downturn. By being set in the 1930’s, the show will capture a similar feeling to the oppressive times of the Industrial Revolution, the original setting of the show. 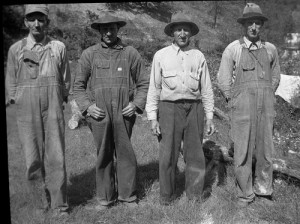 Once the time period of the show was established, Lafleur started with “tons upon tons of historical research. I found every picture of the 1930’s I could possibly look at. I found pictures of people during the depression like farmers sitting in barren fields, and people in the cities begging for money.” After research was complete, she created a presentation that showed the typical look and style of men and women in the 1930’s and reviewed it with Thomsen to verify that this look reflected his vision for the show.

With that overall vision in place, Lafleur moved on to more specific character research where she considered what a particular character would look like and wear. For instance, “Mrs. Lovett is a single woman who owns a business that’s failing, who works all day and has nobody else who works for her. So, of course she’s not going to be in those beautiful bias cut dresses of the 1930’s. She’s in a work apron and a shirt dress and her hair’s tied up and she’s dirty and messy.” For powerful characters, such as the Judge or Beadle, she looked at what  kind of suit men wore in the 1930’s but she also considered what kind of suit would illustrate their intimidating characters, such as a single-breasted jacket versus a double-breasted jacket. She stresses that “as much as you want to reflect the era, you also have to reflect the character themselves.”

Originality is something that Lafleur strives for. She doesn’t like to reference past productions for ideas, but prefers to design from her own research, keeping the look and feel of the overall scheme fresh and unique.  “You’re too likely to steal from past productions if you look at past productions, so in my head the less you know about what it has looked like before the better off you are.”

One of the more interesting elements to the overall design is the color scheme. For Sweeney, the original concept was a color palate of black, white and gray with added pops of color for emphasis.  Hitchcock would often employ this concept, where a scene would be entirely monochromatic except for something such as a red flower, calling the viewer’s attention to it. On stage, this is difficult to achieve, so rather than use pops of bright colors, the concept will involve black, white, and gray with muted blues and purples, anything that creates a monochromatic, smoky, industrial look.

Sweeney Todd is a show that is personally very meaningful to Lafleur.  She did her thesis on Sweeney, and is excited about incorporating her knowledge and passion for this show into her designs.  Stay tuned for another blog post soon to get a sneak peek into costume production for Sweeney!