When QCT’s Artistic Director Brandon Thomsen first encountered Sweeney Todd on a PBS special in 2001, he was completely captivated. Even though it was a concert version with minimal staging and no period costumes, he was really brought in by the story, by the twists and turns, and the overall performance. The complexity of the score also got his attention: the way the lyrics and the music go together, and how the orchestrations tell a story, giving clues through the use of musical themes. “The more I listened to it, the more I realized what a masterpiece it is.” He wanted to know more, so he found a copy of the filmed Broadway version starring Angela Lansbury. “It was so radically different from the concert version because it was fully staged, and I was just really, really intrigued by it.” He says it’s always been on his radar and he’s always hoped to do it, but never seriously considered bringing it to QCT until recently.

In order for a play or musical to make its way to the stage at QCT, it first must meet with the approval of the Play Reading Committee. This volunteer committee is something of a focus group whose members represent the different audience demographics of QCT. Similar to a book club, the committee reads various suggested shows and then they gather together to discuss them. Prior to Sweeney Todd being considered, the committee had read A Little Night Music, another Sondheim show, and after reading that, someone asked about Sweeney Todd. With that prompting, the committee decided to read it and after discussion, it was determined that this was a show that they wanted to bring to Quincy.

One of the considerations was that, much like Les Misérables which was on stage at QCT in 2014, Sweeney presented an opportunity for a different type of actor and potentially a different type of audience. “The music is very challenging, so we thought that people who are really into the music or singing would say, ‘that’s not fluff they’re doing there, you have to be a good singer to pull that off.’” From an audience point of view, Thomsen recognizes that it’s a bit of a risk: “It’s a challenge because it’s a scary story.” He says for audience members who may have seen and liked the 2007 movie, they’re excited to come see it live, but for some who didn’t like the movie, they may not be as eager. Thomsen emphasized that QCT is taking a slightly different approach than that of the movie: “I think we can tell it differently. I don’t think it has to be bloody. I don’t think it has to be excessive. It’s there, but I think you’re much more brought into the ‘why’ versus the ‘what’. You pay much more attention to the motivations of the characters and the story structure itself.” 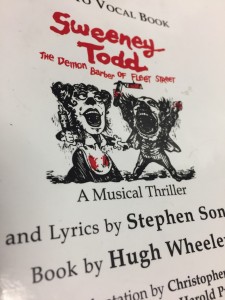 So what is that “why versus what”? Is there a moral to the story of Sweeney Todd? What is the thing that we can all take home with us at the end of the show? “In something I was reading, they referred to it as a parable,” Thomsen said. “I think we tell those stories not to say we want to be like this, or isn’t that great, or isn’t that funny, but it’s what we can learn from it.” If Sweeney is a parable, then one has to find the deeper meaning. There’s a line near the end of the show that reads: “Isn’t that Sweeney there beside you?” which calls the audience to consider the Sweeney’s in their own lives. One cast member observed that you never know what the person next to you might be going through. Thomsen says, “this is really about how one needs to practice forgiveness and look out for other people.”

As the cast has begun to discuss the show, one of the questions they’ve been asking is “What does it mean to be a Sweeney Todd?” Some of the answers they came up with are: obsessive, needy, blinded, narrow minded, narrow focused, hurt, taken advantage of. When it is viewed this way, the show takes on a much more human focus, and the audience can begin to see themselves in the story, and how one can choose kindness, love and peace, or one can choose revenge, darkness, and evil. Thomsen says that he has challenged the cast to be ambassadors of love and kindness and to take the deeper meanings of the show seriously. “This is a very dark show, which means we have to keep it respectful. We can never take the circumstances of the show lightly.”

Ultimately, Thomsen says, “The more I work on it, the more I respect it.  It’s a great thriller, it’s a great mystery and I applaud this piece just for being really well written. I think it’s so neat that our theater will take that risk and do something challenging that not everyone will like, but we see the artistic value of it. I really want the audience to appreciate the richness of the show.”