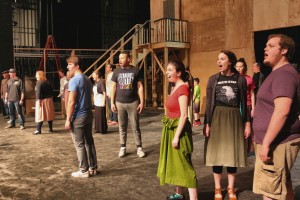 With only a few more weeks before SWEENEY TODD opens, the cast is busy rehearsing, putting final touches on their lines and musical numbers, and making sure every scene is perfect. In the midst of what can be an exhausting time for these actors, there’s something exciting happening behind-the-scenes that is bringing positive energy to the show, both on and off the stage. A while back I wrote about the Secret Encouragers program that Artistic Director Brandon Thomsen had initiated. Recently, I had a chance to visit with six actors who have been recipients of these secret encouragements to hear their thoughts on the impact it is having on the cast.

First I asked the group to tell me about what they had received from their ecret encouragers and how it made them feel. Shelby Rees, a member of the ensemble, recalls a day of rehearsal where she did something she was proud of, but someone else made her feel bad about. “I was feeling really down on myself, but I got a note saying ‘you did the right thing and your leadership is appreciated,’ so that really picked me up and made me feel more confident in myself and in the people around me.”

Another member of the ensemble, Jessica Abrego, received a picture of a flying cat and a note that read, “I believe you can fly, keep hitting those high notes.” Jessica is one of only three sopranos in the ensemble and the vocal range has been challenging. “I was very nervous and insecure about trying to hit those notes, so that kind of helped to build my confidence and helped me to sing out more and, of course, it made me laugh because it was a picture of a flying cat.”

David Samuels, also an ensemble member, recalls finding his first note, written on a napkin and accompanied by a drink, when the cast went out one night after rehearsal. It had been a long week of work, plus a long week of rehearsals. “It was really, really nice. It was a great way to wind down and go into the weekend. The note was really sweet as well and it was just really exciting. It kind of took my breath away. “ He also commented on how the secrecy elevates the positive feelings everyone has about their cast mates: “When you don’t know who it is, it makes you grateful to all of the cast because it could be anyone.”

Ensemble members Michael Perkins and Joshua Hetzler both received candy bars from their secret encouragers. Michael got a Payday with a note that said, “One day it will all pay off in the end.”  “I drive an hour fifteen one way to rehearsals,” Michael said. “It’s good to know someone’s watching. It’s worth it.” Joshua’s 3 Musketeers bar was delivered with a note and a custom meme. “I was really worrying about knowing my music and it was nice to get a gift like that.”

Drew Quintero, who plays Pirelli in the show, has received several notes (but adds that he wouldn’t mind candy bars at all). “My first note was total stalker serial killer. The letters were all cut out of magazines and taped to a piece of paper. I was like, this is creepy. It’s perfect!” What’s really neat for me is that I’m never here – I’ve been to maybe four rehearsals. I’m onstage for ten minutes, so to still be a part of the cast when I’m never here is really nice. It’s neat to walk in and see something taped to the light board or an envelope sitting on a seat.  It makes me feel like I’m really part of something.”

They all agree that this experience has helped build positive energy and trust between the cast. Michael commented that, “When you embody a musical such as this, a darker time, something sorrowful, these secret encouragers help to lift your spirits so you can be a part of the musical, be a part of the story, but still know that there’s hope in the end.” Jessica said, “I think it helps build trust between your cast mates and builds your offstage relationships which inevitably facilitates the onstage ones. Whether you’re the giver or the receiver, it creates positive energy.” Drew summed it up: “We’re all volunteers. We all go to school all day or work all day and then come here for four hours of rehearsal. We all have doubts as actors, but when someone notices something that is positive and good, it helps.”

So far these secret encouragers have kept their identities a mystery.  A few of the group have their suspicions about who they are, but no one knows for sure.  They’ll find out opening night.