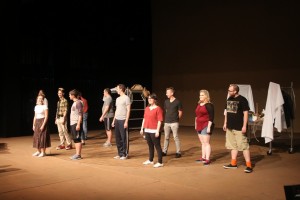 As December rolls around, and the crisp winter air cracks at your face, something very special is happening onstage. Peter and the Starcatcher rehearsals have been ongoing for two months now – from day one, until tech week, it has been exhilarating and thought-provoking.

For most productions, you have a lead(s), supporting characters, and an ensemble; however, with this production the atmosphere has been much different. Rather than lead Suzie not worrying about the background characters doing their buffalo-shuffle, we find in this production that all members commit to varying roles. Peter is not just Peter; he is also a pirate, and water, and a fop. The commitment of the company is intensified as the variation of their roles is intensified. Rather than a mass of green felt flying in with some claws, a crocodile is constructed by twelve people making sounds, using umbrellas, changing their body motions, and “being” an actual crocodile.

When I first read the script back in August, I looked at some of the stage directions such as “Molly follows Alf through a swinging door and down another cramped passageway” and I remember thinking, “Okay… but how do we actually do this?” And on some Tuesday or Wednesday several weeks ago we did just that. WE MADE THE CRAMPED HALLWAYS THE TWO CLIMB THROUGH! We grabbed some ropes and some imagination and got to work. By the end of the night the entire cast was exhausted from “playing” and experimenting with what worked and what the best approaches were, but the end result showed that the entire company had put their own little piece in the collection.

On November 23rd’s practice, I stood on top of a ladder looking at my fellow cast members within a scene and noticed something – none of us had our scripts onstage. We, as a collection, had gotten so comfortable and sure of ourselves and had wanted to be a strong link in a chain. The entirety of us, two weeks before the “no asking for a line” date was reached, had become comfortable with our material. I could only think of back in early October when we were first reading through, stumbling over pronunciations and purposes; but now something so wary had evolved into something so sure. We had a discussion on how “generality is the enemy of art – specificity is the friend of art.”  How painting ‘hotel art’ is not something we want to put out – we need conflict, some grit. 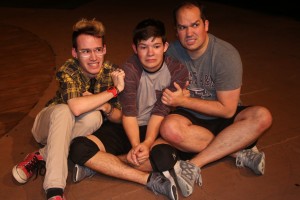 And now we have it. Conflict, grit, and something more.

Orphan boy Prentiss has loved developing his new Starcatcher family. From pirates, to sailors, to tropical kings, to mothers, to captains, to orphans, we all belong. Now be ready to “journey at dawn to the docks of Portsmouth!” and be a kid again.