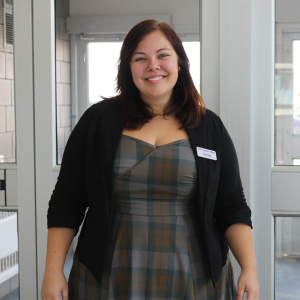 In the spring of 2009, I set out on a great adventure: assistant stage-managing Peter and the Wolf at Quincy Community Theatre. In the fall of 2016, armed with a recently acquired college degree (in a subject unrelated to theatre), I set out on another great adventure: stage-managing Peter and the Starcatcher at Quincy Community Theatre. Same theatre, different Peter. Although, Jordan Lefever did play a bird in both productions, so take comfort in the fact that some things never change.

Embarking on this new adventure was slightly overwhelming, as I had been out of the theatre game for a while. But coming back to QCT felt like coming home. Throughout my four years in college, I did a lot of growing up and a lot of learning, and taking in theatre through that new perspective has been amazing. I know Brandon talks about it often, but so much of what makes community theatre a completely different experience is the variety of people who walk in the door. In Peter and the Starcatcher we have actors and crew members who work in an office all day, who build things for a living, who are students, and who are teachers, and yet they all come together at the end of their very long work day to put in 3-4 more hours of rehearsal 5 nights a week. They get to bring their lived experiences to the stage in a way that professional actors may not be able to.

At QCT I think we are more privileged than we often realize. We are currently in our 79th season, and have so many volunteers and contributors who have left an amazing legacy. Last week while several cast members were helping pull sections of our pit (no fingers were lost in the process, so a huge thanks to all who helped), Devin Rohr (Lord Aster) commented on the caliber of the facilities and the stage, saying that the community theatre in his hometown was in an old church building that had been converted into a theatre. We know what that’s like. I truly believe that theatre can be presented in any space and have a huge impact, but we cannot deny that the space we have to work with at QCT lends itself beautifully to storytelling. 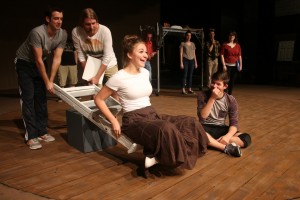 Peter and the Starcatcher is a play with music. It is also a play involving 12 actors who play approximately 50 different roles, including transforming into things like walls, cats, and ocean waves. The result is that most of the actors are constantly onstage and constantly moving. This means two things: that all of the actors are working incredibly hard at all times, and that my script more closely resembles a geometric proof than stage directions. But the result has been stunning. They have, under the brilliant direction of Brandon J. Thomsen (he paid me to say that), created a piece of theatre that will make the audience think, and most of all, make the audience tap into their imaginations.

Our imagination is such a magical tool that is constantly at our disposal, but I feel as though so often as we grow up, we are encouraged to silence our creative voices. Whether this suppressing of imagination is self-inflicted or brought on by social pressures, or a combination of similar factors, the end result is a tragic one. Peter and the Starcatcher looks to undo that learned behavior and unlock the imagination that is brimming under the surface for so many adults. The show asks you to suspend your understanding of reality and see drop cloths as the sails of a ship, and a banana with a bandana tied around it as a bird (that is flown around the stage by one Jordan Lefever). I count myself lucky to be part of such a wonderful cast, crew, and overall organization that allows grown-ups the opportunity to come together to imagine, create, and tell important stories.