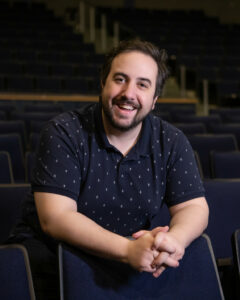 Where does theatre happen? Your first response would probably be: “on stage.” If you’re familiar with QCT’s spaces, you might get a little more specific: “in a proscenium theater” (such as the Barbara Rowell Auditorium), “in a black box” (like the Lab), “in the round,” etc. You’re right, of course– but if you think about it, the act of theatre can really occur anywhere. When we explore theatrical production outside of conventional theatrical spaces, we are making what is called “site-specific theatre.”

When we took Miss Electricity on the road earlier this year, we performed in community centers, in worship halls, in gyms, in cafeterias. We adapted non-theatre spaces into “traditional” theatre venues, by erecting our set on one side of the space and delineating the audience seating area with tape, chairs, or markings on the floor. We transformed our tour stops to suit the work that we had already created. All we needed was the right amount of square footage.

We can certainly describe QCT on the Road as a kind of site-specific theatre: it did require us to be creative in how we performed the show, depending on the space we were inhabiting. Differences in acoustics, or the size and placement of the audience, or even the temperature of the room required minute adjustments to the show. This fall, however, we are offering several classes that take a more radical approach to theatre-making in non-theatre spaces.

Village Voice theatre critic Arthur Sainer, an expert on downtown experimental theatre in the 1970s and 80s, wrote: “Where should a play happen? The theatrical event always happens within a space, but only sometimes is space itself an event.” He’s making reference to a genre of site-specific theatre commonly called “promenade” or “immersive theatre.” A popular example of promenade theatre is Sleep No More, an exhilarating and genre-bending adaptation of Macbeth in permanent residence at the McKittrick Hotel in New York. When you go to “see” (more apt would be “experience”) Sleep No More, you start in a posh 1920s-era lounge, where you are given a white, expressionless mask that you must wear. You are then called by group into an elevator, where an actor will explain to you the rules of the performance: wander around anywhere you want, explore the environments, follow actors around (just don’t touch them), do not speak. Most importantly– your individual experience will wildly vary, as each trip through this incredibly eerie and magical world will be completely different. You may open a door and stumble into a foggy, gloomy graveyard (all inside, of course), encounter a scene between Banquo and Macbeth, then chase Macbeth to a dusty detective’s office, where another scene will play out. You might choose to follow another actor, or just stay where you are and see who arrives next. You might not see any actors, if you’re just in the wrong place at the wrong time. The story is highly abstract and expressive, as it is performed mostly through dance with very little language spoken. Ultimately, audience members are asked to make their own meaning of the experience. The “play” begins and ends in the lounge, where audience members often

linger, excitedly swapping stories of what they saw and what it could mean. It’s not for all tastes, but I recommend that everybody attend at least once (it’s definitely a bucket list item).

In Sleep No More, the McKittrick Hotel itself (a space that seems to disobey the laws of space and time) is the main character. How you wander its halls and observe the goings-on within forms the basis of your experience. The story emerges from the environment itself. I actually worked on an early version of the show when I was at the American Repertory Theater, and witnessed how Punchdrunk Theatricals drew inspiration from the original venue– an abandoned schoolhouse in Brookline, Massachusetts. The narrow hallways were flanked by leaded glass-windowed doors into classrooms. What if you opened one of these doors and, instead of entering a classroom, you stepped into a moonlit forest clearing?

In our Site-Specific Theatre class for high schoolers and our Spooky Stories class for middle schoolers, we’ll be emulating Punchdrunk’s process and creating short plays inspired by the hidden corners of QCT’s building. We’ll even be performing them in these locations (which could be a stairwell, down an aisle in costume storage, backstage, etc.), drawing attention to the importance of the space itself in these innovative theatrical experiments. The goal of introducing site-specific theatre to our students is to heighten their awareness of where a performance is located, and how every environment may have its own story to tell.

Within the rich history of live theatre, there are many diverse approaches and styles. One way that we fulfill our mission to provide quality theatre education to the community is by thoughtfully introducing these different ways of working to our students. By providing our budding artists (and art lovers) with a full and complete toolkit—who knows, maybe they’ll create the next groundbreaking production that changes the way we think of theatre!