Skip to content
Home » Blog » Introducing the cast of TRAP!

Introducing the cast of TRAP! 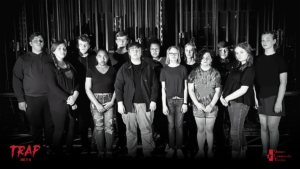 QCT’s best-kept secret is about to be revealed as we announce the cast of Trap!

Trap, written by Stephen Gregg, takes place one night in suburban California, where every person in the audience of a community theatre play fell unconscious—except one. A group of actors recreate interviews with witnesses, loved ones, first responders, and investigators in an attempt to unravel the truth of the incident. But as the strands weave together into an increasingly dangerous web, it becomes clear that the phenomenon may be more dangerous—and widespread— than anyone imagined. Unnerving, exhilarating, and wildly inventive, Trap is unlike anything you’ve seen on stage.

Director Brendan Shea says, ” If you like mind-bending thrillers, you won’t want to miss this one. Trap toys with the conventions of theatre and subverts audience members’ expectations every step of the way; our ensemble of teenage actors have had a lot of fun putting the puzzle pieces together. Just remember, once you see Trap—don’t tell the secret.”

Trap is under the direction of Student Theatre Director Brendan Shea, with scenic and lighting design by Trey Ehrhart, and costume design by Stacy Barton.

Performance dates are June 17-19. Tickets are on sale May 16. Join the cast and production team for Discovery Night on May 31. Discovery Night is a free event, but space is limited. Please click here to RSVP.