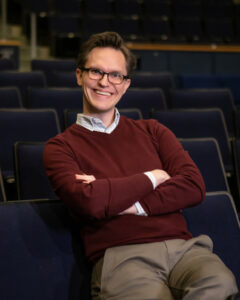 In 2003, in Watertown, WI, I directed the play Auntie Mame, based on the book by Patrick Dennis. Now almost 20 years later, in Quincy, IL, I am directing the musical based on the play! At this point in my career, I’ve directed only one show twice, and that was Hello, Dolly! (1999 and 2017). This is my first time directing a play and the musical of the same source material.

My work on the musical in 2022 has brought back many fond memories of directing the play. I remain very close to some of the actors from Watertown, and we still quote some of the lines when we see each other. On the opening night of Mame in Quincy, I called the actress who played Auntie Mame in 2003, and we reconnected for the first time since 2004. We spoke briefly but reminisced about crazy things that happened during the run, and we shared our mutual affection and trust for one another during that time. It was very special.

With almost 20 years of experience (and maturity) added to my resume since Auntie Mame, I have a deeper appreciation for the story. In 2003, it was just a “good time.” We focused on the quirky characters and the hijinks. In 2022, coming off a global pandemic, I see it as a story of life: find what makes you happy and have the courage to go for it, and be kind to one another along the way. The comedy is definitely still there, but the relationships are stronger.

Broadway composer Jerry Herman said that his time working on Mame was the smoothest and happiest of his professional career. While mounting our production was anything but smooth, it was very happy. No matter what obstacle we faced, my love for the story, the songs, the dialogue, and the cast pushed us through to victory. I think that’s the “Mame Effect.”

Mame is bursting with heart and reminds us to be unashamedly ourselves and to champion the underdog, which is exactly what we need at this moment in time. People leave the theater with big smiles and full hearts. I experienced that in 2003, and I’m experiencing it again in 2022.