Thomsen Talk: We’re here, and we are so glad that you are, too. 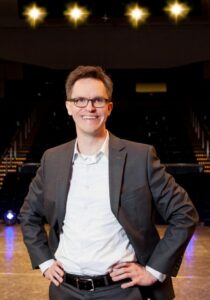 This time last year, we were preparing a virtual presentation of A Christmas Carol. What we had thought would be our return to live theatre turned out to be a different kind of QCT history – the first time a full-length QCT play was recorded from the stage and made available to watch in homes all over the country. It’s not what we started out to do, but we adapted, we changed so that we could stay connected to you and to our mission, and we are really proud of what we accomplished.

Change has really been the essence of 2021. We entered the year with such uncertainty — when could we gather actors and audiences in the same room again? Despite the unknown and the inevitable changes that lay ahead of us, we forged ahead, and some pretty remarkable things happened along the way. Miss Nelson is Missing!, another virtual production, was seen in over 100 classrooms! In April, Jeri Conboy welcomed us “back home” to live programming on the QCT stage with the one-actor play, The Belle of Amherst. Jeri gave a tour de force performance as Emily Dickinson that would not have been seen otherwise. Then music returned to the stage in May with the songs of Jerry Herman. In this revue, with a cast that ranged from age 21 to 95, we were reminded that the “world is full of wonderful things.” Student theatre conducted in-person classes and then was able to have its first in-person production, The Miraculous Journey of Edward Tulane. The production design and staging in the Lab Theater were absolutely spectacular, and I was so proud of director Brendan Shea. It was his first in-person production as a director at QCT! (He joined the QCT team just before Covid in 2020 and had only been able to direct virtual programming up until this point.) During the run of Wonderful Things, we were able to announce that we were moving forward with Chicago. The cast and crew had been on standby for over a year, and we got the greenlight! Unfortunately, not everyone was able to come back, but we were so happy to welcome the new people to the cast and crew. The opening night was the stuff dreams are made of. The energy was so high from both the cast and the audience — all so grateful and excited to be together.

With Junie B. Jones, we were able to welcome schools back into the building for daytime performances. Oh, it was so exciting to have nearly 1000 students experience live theatre in one single morning! Then came Beauty and the Beast…. We wanted to end the year with something truly magical and beautiful… a gift to the community. It’s probably in my top three of “most difficult shows I’ve ever done,” but so worth it! Every performance was sold-out two weeks before we opened, and you could feel the excitement as people arrived…. many wearing gold Belle gowns! The immediate standing ovations at the end of every single performance was an indication that the shared experience of live theatre was something to treasure.

Change is really hard, and over the last year, QCT has had to navigate difficult waters, with “is it going to be live or virtual,” staff changes, mask mandates, vaccine policies, etc., but in the words of the late Stephen Sondheim, “I got through all of last year, and I’m here. Lord knows, at least I was there, and I’m here. Look who’s here, I’m still here.” We’re here, and we are so glad that you are, too.