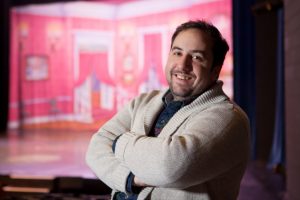 When I introduce myself as a dramaturg, I generally need to repeat myself (or, at worst, reassure the listener that I’m not making a joke about cleaning the theatre bathrooms). The dramaturg, being a practitioner of dramaturgy, is a lesser-known and frequently underutilized member of the professional theatre world– and yet, dramaturgy factors into every step of the theatre-making process, from page to stage.

I have a graduate degree in Dramaturgy (every parents’ dream, I know) and was attracted to my grad program due to its broad range of coursework and professional practice. It seemed to be designed to create a theatre generalist: one who could prove useful in a rehearsal room, a classroom, even between the pages of an academic journal. Although “production dramaturg” is a job title we don’t often see in community theatre (I’ll explain why later), trained dramaturgs fill the role of arts critic, theatre educator, literary manager, playwright or adapter, even artistic director at institutions around the world. So…what exactly is dramaturgy?

To me, the most useful definition is “the study of the craft of theatre.” In searching for similar -urgy words, the other most common one that cropped up was “metallurgy,” which refers to the study of the composition of metals. What is this alloy made of? What is its best application? What makes it strong, or shiny, or…um, whatever else a metal can be described as? Thinking of dramaturgy as a similar exploratio

n and examination of the composition of theatre, we can start to understand its utility (and see it everywhere).

A theatre production often starts with a script, a “play.” As we know, a play is just part of the alchemical equation for a theatre production. It’s merely a starting point, one that is animated by all the other tools of the theatre

. The performance, design, environment, directorial vision– even the mission of the theatre that’s producing it– all of these form the components of the audience’s experience of theatre. The study of these components, and how they work together, is dramaturgy.

But let’s zoom in even further. The text of the play…which got us into this whole mess to begin with…contains many components itself. The action, the characters, the structure of the play all contribute to its meaning and intended effect. The close and careful study of the dramatic text– taking it apart, examining the cogs and wheels that make the play “tick,” then putting it back together again– this is dramaturgy, too. In fact, this sort of dramaturgical analysis of the play could be seen as the most important step in bringing it to life. We chart out the play’s dramatic structure (is it balanced? Is it linear? Does it come “full circle” at its conclusion?); we parse out the meaning of the play (how does it work on us as readers or audience members? What is it really about?); we research the historical, social and biographical context of its author (what could have inspired this play? How does this play fit into the author’s oeuvre? What does it mean to produce this play in 2021?). By performing this “deep dive” into our source material, we emerge with a well-rounded and holistic understanding of the play. And only from a deep understanding of the play can we develop a vision for the production that supports the text– and still leaves room for the individual interpretation of the artistic team. Every new production of play is a conversation between past and present, between the playwright and the artistic team. An informed conversation is an interesting one. Or, as David Ball wrote, “the theatre artist who perceives little on the page, puts little on the stage.”

I mentioned that we don’t see the role of “dramaturg” being in hot demand nowadays; you may see a credit in a Broadway stagebill, or in the staff page of a large regional theatre. Directors, playwrights and actors tend to do their own dramaturgy, more often than not. One of the many ways we spread the dramaturgical love is through our class offerings, such as the “Dramaturgy Club” course (for adults 18 and older). Whether you are an actor, a props artisan, a stage manager or a playwright, a deeper understanding of the craft of theatre can only enhance your work at QCT. As for this old dramaturg…I love to promote awareness of this often overlooked discipline. Especially if, one day, I won’t accidentally be called a “dramaturd” anymore.