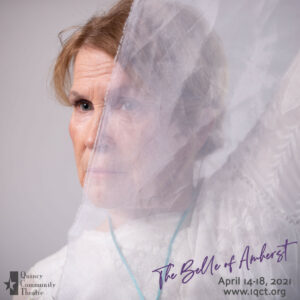 It was announced in mid-February that live theatre would return to the tri-state area with our production of The Belle of Amherst, a one-person show written by William Luce about the great poet Emily Dickinson. There’s a great irony about presenting this play in the era of Covid-19. Emily Dickinson was a (now) famous recluse! She spent much of her life in seclusion. She would have loved quarantine and a stay-at-home order! If the people of Amherst, Massachusetts knew her at all, they would have known her only as the eccentric woman who wears white and no one sees. After her death at the age of 56, her sister discovered in Emily’s trunk nearly 2000 handwritten poems. Very few people knew that this woman in isolation had an incredibly unique perspective on life, death, and the world and had the ability to share it through words on paper.

The Belle of Amherst is a play I have wanted to direct for about 15 years. I first saw a friend of mine perform it, and later she presented me with a volume of “The Complete Works….” I saw a filmed version of the play that starred Julie Harris, and I found the script at a used bookstore several years ago. As the artistic director of a theatre, it’s my responsibility to select the stories that we will tell each year, but that doesn’t mean I do whatever I want whenever I want. Instead, each year I look at where we are as an organization, as a community, how we can grow, and how we can vary the voices. With a possible return to live theatre during an era of social distancing, I wanted to select a piece with a small cast that would feel appropriate for intimate audiences. Dreams wait for the right timing…. now is my timing.

Traditionally we would hold open auditions for all our roles, but in the unique circumstance of a one-person show, I needed to make sure we had someone in place upfront who wanted to take on the hefty task of memorizing a 90-minute solo play and who could hold the audience’s attention for that amount of time. Local actor Jeri Conboy has played several roles in the past that have had loads of dialogue, and I knew she could not only memorize the piece but would grow into the role and make it her own. I approached Jeri with the idea, and she thought about it for a week and came back with a yes. We decided to meet to discuss the process. As neither of us had done a one-person show, we talked about ways we might proceed. (Side note: I performed in a solo show as Abraham Lincoln, but I also directed it, and directing one’s self is entirely different from directing another person.) Jeri recently retired and had daytime availably, so we decided that most of our rehearsals would be during the day. We discussed the frequency of rehearsals – should we rehearse every day, or would it be better to rehearse a few days a week so that she could memorize on the off days? Ultimately, we decided that we would figure it out as we go. We would adjust the process to suit what we needed.

Our first rehearsal was just reading the play out loud. I took note of words, places, and people that I needed to look up. Then we went our separate ways and did our own research. We read books, watched documentaries and movies, and listened to interviews. We started each new rehearsal with sharing some piece of information that we had discovered since the last time we met or a “light bulb moment” about a poem. Unlocking the poetry is the most challenging part, but we talk it through, asking “what if…. what if….,” and frequently what happens is Jeri throws out something about a word or phrase, and it opens my mind to the rest of the poem. Emily Dickinson’s poetry is exquisite.

What I have appreciated most about this experience has been that our respective impressions of Emily Dickinson have changed during our rehearsal period. Together, Jeri and I have discovered that Emily Dickinson was a radical who would not accept the conventions of her time, and rather than give in to something she didn’t want, she took control of her own narrative. When Jeri and I discussed the question “What do you want audiences to walk away with after seeing this show,” Jeri said, “I think I want them to have more questions.” No one will ever know the true Emily Dickinson — only she knows that — but I hope the play will serve as a reminder for people to ask questions of themselves and of each other — to seek to understand. Emily Dickinson is a fascinatingly complex human being. We all are.

See you at the theater!