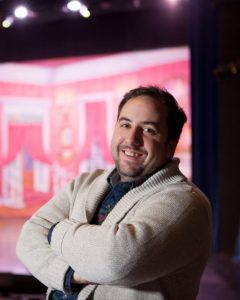 Way, WAY back (we’re talking thousands of years back,) theatre was born in the Dionysian festivals of Ancient Greece. Back then, theatre was a civic duty. Citizens would attend week-long competitions between the brightest theatrical minds of the day taking in a wide array of work ranging from the absurd to the tragic. It is in the latter, the Greek tragedies that we still read to this day, that we find the first examples of how theatre could be used to transform society, to mend old wounds, and to promote important social dialogue.
Sophocles’ early tragedy, Ajax, tells the story of a soldier who returns home after a long, bloody war. He has been changed by his experience on the battlefield and feels unappreciated and out of place at home. Blinded by madness and trauma, he attempts to assassinate his old commanding officers. The majority of the audience for Ajax’s premiere would likely have been male citizens of Athens, all of whom would have recently served in the military. Thus, Ajax is thought by scholars to be the first play about PTSD and the psychological effects of war, performed for (and by!) men that experienced brutal warfare firsthand. Those audience members who felt akin to Ajax could take a lesson from the story, look inward, and perhaps begin to heal.
2020 was a year in which hardship and injustice were thrown into sharp relief, where personal struggle seemed universal and social divides impossible to bridge. In many ways, it was an extraordinary year– but in others, the critical issues of the day had been lingering beneath the surface since way, way, WAY back. As we ring in the new year, we must resolve to heal by listening to one another, by promoting understanding, and by approaching difficult or painful topics head-on and with grace. In this regard, theatre has had a 2,500 year head start.
QCT has received an important grant to participate in Healing Illinois, a state-sponsored initiative to support racial healing projects across Illinois. We are the only community theatre to be honored with this grant. In partnership with the fantastic Teen Reach, we will create an original dramatic work from the personal stories of a diverse group of Quincy teenagers. The project, Quincy Teen Voices, aims to amplify the powerful words of our local teens in the service to advance social justice and embrace identity. Quincy Teen Voices launches on January 12– stay tuned for updates and even a chance to view our work in progress!
Theatre can take many forms and serve many purposes. Whether that purpose is to lift one’s spirits through a memorable performance, to see the world in a new light, or to engage citizens to participate in social change, the life-changing potential of this beautiful art form is undeniable. And so it is only fitting to conclude with a call to action from the great Brazilian theatre maker Augusto Boal, whose “Theatre of the Oppressed” provided a blueprint for impactful activist theatre:
“Theatre is a form of knowledge; it should and can also be a means of transforming society. Theatre can help us build our future, rather than just waiting for it.”