Skip to content
Home » Blog » The Making of CHICAGO

The Making of CHICAGO 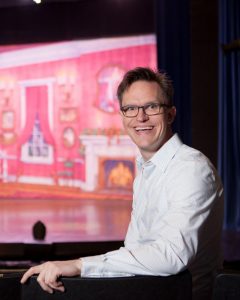 Artistic Director, Brandon Thomsen, answered some questions about the making of CHICAGO and his vision for the show on the QCT stage.

What has your process looked like in preparing to direct this show?

I’ve been reading the book All that Jazz: The Life and Times of the Musical Chicago by Ethan Mordden, and it has been invaluable. It goes into the history of the city of Chicago itself, the original play, and how the musical came to be. I’ve been listening to several cast recordings in order to gain musical perspectives.

One of my favorite parts of the process can also be one of the most challenging parts of the process: the set design. I like when scenery serves as a physical metaphor for the show. I’ve been thinking about what the story means to me at this time of my life and how we can reflect those themes in the physical world of the play. Because of the thirst for fame that exists in this story, I imagine us in a very theatrical world instead of a literal world; a world where there is razzle dazzle and, as Lawyer Billy Flynn says, “things are not always as they appear.”

How would you describe your vision for Chicago?

Just like Bye Bye Birdie, Chicago is a satire. It’s important to know that it shouldn’t be taken at face value. It’s not condoning the immoral actions of the characters but rather calling them out. The author of the original play Chicago, which served as the basis for the musical, was a devout Christian. She was a reporter and journalist in the city of Chicago and wrote a play that would unmask the American people for glamourizing corruption.

In my research on the musical, I came across this quote: Satire isn’t a lecture in dark robes; it’s a fiesta of fun. Your laughter shocks you: so you’ll think twice.

I’m interested in playing up the glamour of the piece and finding a moment where that glamour is exposed and the truth is revealed.

Our culture makes celebrities out of people who should not be celebrated; we latch on to corruption; we laugh at images that in actuality are sad or disturbing. We are constantly taking pictures and videos and sharing them in hopes of validation through “likes” and the hope of going viral.

How is this production bringing something new to this story?

What’s new to the story is US!!! This production will be original to Quincy Community Theatre because everyone involved brings their perspective to it. We don’t approach productions by copying what’s been done. We start with the words on the page and by listening to the music, and we share our instincts to that. If I were to direct this show again ten years from now, it would be different because I would be different. I would have ten more years of life experiences, and I would undoubtedly discover something new in the material and have a new perspective. For the 2020 season, I’m thinking about what the story means to me today, and I look forward to discovering more about it alongside the production team and the cast — whoever they may be! 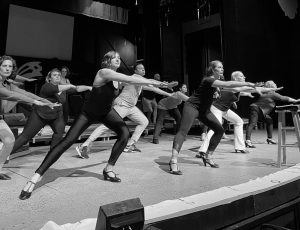 What about Chicago are you most excited for?

I love the tablework! I love being with actors, asking questions and discovering answers and ideas in the dialogue and lyrics right alongside them. We discover the story together. The musical Chicago has such bite to it and is told in such an entertaining way! I look forward to excavating the punch that is written into each and every line and lyric.

Who should come see this show?

What do you hope audiences get from Chicago?

I hope that those who attended Chicago feel entertained in the fullest sense of the word – they experienced a good story told well. Most importantly, I hope that seeing Chicago will spark audiences to reflect and ask their hearts what their intentions are in the words they say and the things they do.

Is Chicago going to have as much razzle dazzle as we would expect?

It will be, as Billy Flynn would say, “splendiferous!”

CHICAGO will run March 19-22 & 27-29
Tickets go on sale February 24.
For those who can’t wait until March 19 to experience this satirical world, QCT will host Discovery Night on Monday, March 9. RSVP here.