The emcees for the evening were Rowan Cafun, Bill Stalder, and Randy Wolfmeyer, who reunited after having played the three dads in QCT’s 2018 production of “Mamma Mia.” The ceremony recognized seventeen individuals for their contributions to the theatre in 2019. Guests also enjoyed a performance by student actor Helen Seaman of ‘Let it Go’ from Disney’s Frozen Jr.

The highlight of the evening was the presentation of the organization’s highest honor, the Enid Ireland Award, to long-time volunteer Donna Haire. Haire has been a dedicated volunteer at the theatre for many years. She has served as a board member, committee member, sound board operator, and most notably, as a production stage manager. 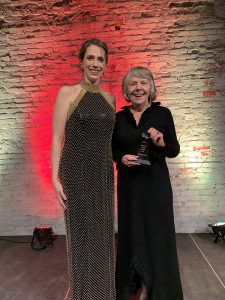 Sara Reuschel, QCT’s Executive Director, presented the Executive Director’s Award to Judith Crocker. A long-time friend of the theatre, Crocker has provided housing and transportation for many of the guest artists brought to Quincy to support QCT productions.

Brandon Thomsen, QCT’s Artistic Director, presented the Artistic Director’s Award to Marion Dye. Dye shared her skills and talents with many students in schools and at QCT throughout the 2019 season and was an advisor in the lengthy selection process to hire a new education director.

The Paul Denckla Technical Director’s award, honoring individuals who exemplify Denckla’s commitment to the technical aspects of the theatre, was presented to Carol Whaley. Whaley, a newcomer in the 2019 season, was a consistent and invaluable presence backstage during the construction and painting of QCT’s sets during the 2019 Season.

The Front of House Award was presented to Nora Baldner for her countless hours spent in the Box Office and front of house in the 2019 year. Baldner assisted with costumer service needs, season tickets, ushering, filing, and data entry. Where there was a need, Baldner stepped up to help the theatre where she could.

Performance awards, voted upon by QCT’s audiences, were presented to eight individuals. Winners for an outstanding performance in a play were

Winners for an outstanding performance in a musical were

This year, the Ghost Light Award was presented to one individual: Lily Twaddle. The Ghost Light Award is given to those who perform tasks that go above and beyond cast or crew expectations, willingness to help others for the success of the entire show, and ingenuity in problem solving. Twaddle was nominated by cast and crew for her work in both Phantom and Bye Bye Birdie.

Photos of the evening were taken by Liz Hoffman.