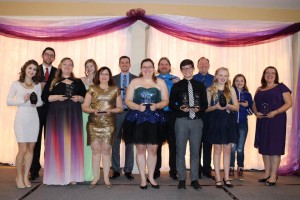 The staff of QCT is back in full-swing (cue Tarzan) working on the 2017 season; however, before we get too far along, we stop to look back at 2016, to remember and to thank. Saturday was QUILTAS. QUILTAS is probably the most exciting night of the QCT year because it’s like having an opening night performance for ten productions all rolled into one! Everyone dresses up in their finest, and we reunite, we reconnect and recollect. It’s a chance to see people with whom you worked closely and intensely for several weeks and perhaps haven’t seen since the final performance. It’s a chance for the ushers and the actors and the patrons and the painters and the sewers and the musicians and the crew to all come together as one, knowing each had an important role in the history of an organization that’s been around since 1923 and an art form that’s been around since Thespis first stepped out of the circle (that was sometime earlier, I think).

We often talk about a production becoming a family, which would then make QUILTAS the family reunion. Perhaps you can’t wait to attend your family reunion or maybe there’s a hint of dread; there are some inside jokes; and there’s inevitably someone you want to avoid; but by the end of it, you’ve had some laughs, maybe some tears, and you’re glad you went. Why? Because you’re in a room filled with people who were a part of your life and who care about you.

Our slogan for 2016 was “Stories Begin,” and we are so thankful to all those who stepped out of their comfort zone and joined the QCT Family this past year. And to those of you who return to QCT year after year, please know that you are so dear to us. We were honored to reunite with you all this past weekend and celebrate your story.