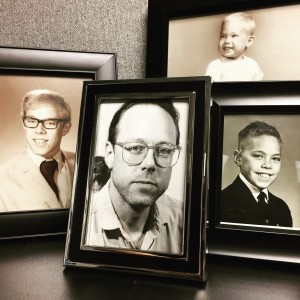 On November 4, people from all over the Tri-States gathered to remember an artist, father, friend, and one of the best Technical Directors we’ve ever known: Paul Denckla. Among those sharing stories of Paul were QCT Executive Director Dan Conboy and Artistic Director Brandon Thomsen. Below are the transcripts of the speeches they presented in Paul’s honor…

Many of us here came to know Paul because of his extraordinary work with Quincy Community Theatre. Paul was with QCT from 1992 to 2004, and 2007 to 2016. When we would give tours of QCT, Paul would introduce himself as the tech director, the set designer, the lighting designer, the sound designer, the IT guy and the janitor. Over the years he assumed many different roles. He’s been the managing director. He’s been the artistic director, and considering it took Dan and I over two hours yesterday to put the projection screen together, it’s safe to say that we could never do his job.

Paul was my most frequent collaborator. We rarely saw the initial design through the same set of eyes. He’d bring in a design and have the door on the right and I’d say, Oh, I saw being it on the left, or he’d have the door on the left and I’d say I saw it being on the right. There was one time he put the door on the left, and I said, “Paul! That’s exactly where I pictured it!” And he said, “I thought of that ahead of time and switched it.” Paul really was an incredible collaborator, and I wanted to share with you some of the lessons I learned from our time together:

As we were approaching discussions on the design for the next show, I said, “This one should be an easy one,” and he replied, “There is no such thing as an easy show.” I now understand this. It was a warning of sorts – No matter the size of the set or the cast size, play or musical, each production brings with it its own set of challenges, and it was advice that each production deserves absolute care and attention.

In a design meeting, I was making a pitch for an idea, and he said, “It just doesn’t say anything.” From then on, our ongoing line in our meetings was, “What does it say?” His designs weren’t about what looked cool and what would impress people. What Paul taught me is that every piece of scenery on that stage had to contribute to the story being told. 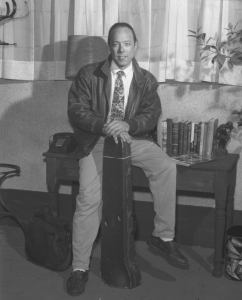 Paul was the hardest working man I know. He often frustrated me because he waited so long to start designing and then to start building, but when he got going, he put in countless hours and continued to work on perfecting the sets and lights well past opening night. I felt I needed to put in more hours just to be worthy to in his company.

I’ve said to some that I think of Kelsey Pigg as my work wife, and Paul was my work husband. I collaborated with him on more shows than I had with anyone else. Mary Poppins was an especially difficult show for us, and after we closed, I visited with Paul in the scene shop and said, “Well, Paul, this was a tough one. Was it worth it?” And with absolutely no hesitation, he gave me that puzzled and disgusted look he was so good at giving, and said, “Oh, absolutely. I wouldn’t have done it all these years if wasn’t worth it.”

Every January, QCT has a special evening to recognize the efforts of the volunteers of the previous season. Awards are given out for outstanding performances, but also to those who went above and beyond the call of duty. There is the Rose Lacquement award to honor a student who was committed to the theatre; there is the highest honor given to a volunteer who has given years of service to QCT called the Enid Ireland Award; and tonight, I’m pleased to announce that the technical theatre award, given to a volunteer who was especially helpful backstage, will be given the new title, The Paul Denckla Technical Director’s Award. Just like Rose Lacquement and Enid Ireland, Paul’s legacy will continue. 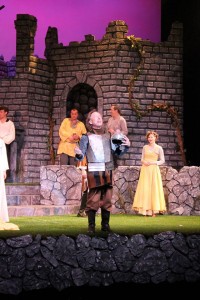 There has been, and there will continue to be among us, opportunities to share our experiences with Paul.  As a volunteer, a student, and lately as a colleague of Paul’s, he and I would sometimes take advantage of opportunities to share experiences.  For example, I taught him everything he’d ever want to know about being a parole officer, and in return I was treated to many lessons about that living organism known as color.  I was first made aware of his appreciation of color in Joseph and the Amazing Technicolor Dreamcoat when a plain brown patch became Russet.  In my quest to discover the appropriate words to talk about Paul’s love of color I came upon a poem written by a poet that goes by the name of Sparkling Dust. Just her name seems appropriate. The poem is titled “The Mighty Painter”.  Its first verse goes:

What is life without color?
Just a blank paper, blown away by the wind
Without any story to tell
Without glory to share

Paul loved to help create stories through color and his artistry on the stage.  We were so fortunate to be able to share in those stories, adventures really.  Unlike so many pieces of art, in this medium you can only experience it once.  But as Sparkling Dust concluded, “once is enough, for it is the pure truth of the adventure.”

Paul’s children have suggested that Memorials be addressed to the Paul Denckla Scholarship fund, in care of Quincy Community Theatre, for those students wanting to learn more about creating their own stories and adventures.

From Paul’s family and Quincy Community Theatre, thank you to everyone who helped us celebrate Paul’s life. Likewise, thank you to those who were not able to be with us for expressing your condolences. Paul Denckla was an inspiration to us all—personally and artistically. The world is more colorful because he was in it.