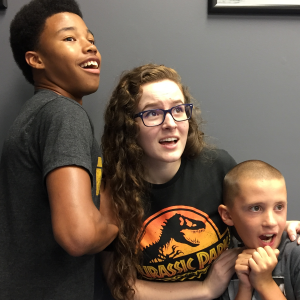 Every night it’s an hour here, an hour back. Yes, her character travels across solar systems; but Zoe Gudehus has a long trip of her own. And it’s all to be involved with the theatre.

Zoe, who is 17, began acting in sixth grade with her elementary school’s drama club. She was hooked, participating in community and school productions ever since. But this year was different. This year, her school announced that they were no longer able to keep their drama club going. So, Zoe began to explore options outside of her county. She remembered the commercials she saw on TV for QCT and ran with it.

And, on her first QCT audition, Zoe was offered a role. But not just any role. Zoe was asked to play one of the most iconic characters in literary history: Meg Murry. Published in the sixties, A Wrinkle in Time follows the incredible journey of Meg, her brother Charles Wallace, and her friend Calvin across the universe in search of her missing father. Meg is impatient, intelligent, real, relatable, and, therefore, inspirational.

“It’s really exciting to portray a character that has been influential to so many young people,” said Zoe. “We are similar in a lot of ways. We are both very passionate about things we care about, but we also have a sense of humor. It’s been interesting finding a balance with what Meg is like and how my personal traits and experience can help bring her to life.”

“Because my dad used to be in the Army, I was able to really tap into the side of Meg that struggles with the uncertainty surrounding her father’s whereabouts.”

While Zoe works on truthfully portraying Meg, she’s also getting to use some exciting special effects. Because A Wrinkle in Time is set largely in space, Zoe feels this show really sets itself apart from others with its unique costumes, lighting, and sound. Mix in her castmates and the suspense, adventure, and comedy of this well-known story, and you have an experience that really sets itself apart.

“The experience has been amazing. Everyone has been welcoming and really passionate about the play whether it is their first or fiftieth production.”

As her QCT debut quickly approaches, Zoe is beginning to think ahead to what lies next. Personally, Zoe feels this experience has really helped developed her as a performer. In the audience or on the stage, Zoe hopes to return to QCT after A Wrinkle in Time. And she thinks you should, too.

“I would encourage anybody interested in theatre to audition for a play at QCT. It’s really been an experience unlike any other I’ve had; you will get to experience so many parts that go into a production that you may have missed. The people really are what make it so enjoyable, but the Theatre itself is so impressive and such an honor to perform in. “

Zoe is seventeen and a senior in high school. She was born in Germany, but moved around a lot because her father was in the Army. In 2012 her family moved back to her father’s hometown – Edina, MO. Zoe has three older sisters and participates in drama, cheer, and scholastic bowl in her high school, Knox County.