Skip to content
Home » Blog » Campfire Stories: Onstage and Off

Campfire Stories: Onstage and Off 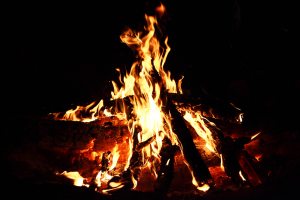 When your hands are sticky from roasting marshmallows, when the embers burn low and the occasional pop of the wood is the only thing to disturb the silence; that’s when it happens. “I heard this story once. It gives me chills just to think of it…”

It doesn’t matter where you are—at Girl Scout camp, Boy Scout Camp, on a family camping trip; when the witching hour rolls around and the eerie glow of the fire just barely deflects the steady creep of darkness, the ghostly campfire stories begin.

My dad is a master of the campfire story. His stories were always (quite suspiciously, I might add) about a family just like ours, camping just like we were, all on a night just like this night. My sister and I would sit on the edge of our seats, eyes wide as saucers, waiting to hear what horrible monster that family encountered. And at the most terrifying moment—BAM! That’s when he would use his secret weapon: sound effects.

Seeing as we didn’t travel with a miniature door or thunder tube, his sound effects had to be a little more rudimentary. But boy, were they effective! A properly placed howl, growl, or slap on a log could make us both jump ten feet into the air. In a way, it made the story scarier—almost like you were part of the story; like it was happening right there and then. And it isn’t just my dad; lots of dads are great spooky campfire story tellers and clearly love doing it! 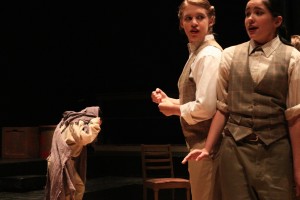 So when people ask why we’re doing a show called THE HALLOWEEN TRILOGY in June, I think back to those campfire stories. Just like s’mores, hot dogs, and fireworks, scary stories scream summertime fun. They did for my family and friends. Sitting there trying to look brave, screaming, then giggling uncontrollably because you weren’t the only one who did.

In a weird way, these stories of spectres, ghouls, and goblins help us bond and help us create new stories with friends and loved ones.

It makes sense, then, that THE HALLOWEEN TRILOGY captures that essence.

Since we’re performing in the round, your family will get to pick a spot around the “campfire”—the performance space in the middle of the lab theatre. At our performers’ disposal is an arsenal of sound effects—cups, knives, weights, rain sticks—to accompany them as they actually stage each creepy story in the center of the circle. But you won’t see these tricks coming. That’s because you’ll be sitting next to one of the storytellers—just like you would if you were really camping.

With chills and thrills coming at you from every side of the room, THE HALLOWEEN TRILOGY is the same kind of scary fun you would have on a dark summer’s night. Only this time, maybe dad will jump out of his seat, too.