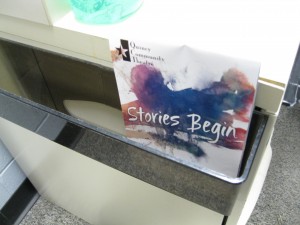 If you missed our Membership Meeting on Tuesday, you also missed Brandon’s speech.

Or maybe you weren’t able to hear every word due to the infamous Brandon bug attack. (Yes, a bug flew down Brandon’s throat. Yes, it did cause a lot of vocal discomfort as Brandon was trying to announce the season. No, we did not catch this on video…though we wish we had! Yes, Brandon is doing much better now. No, we cannot say the same about the bug.)

Anyway, “Stories Begin” is much more than a slogan for the season. See what Brandon had to say about next year his speech:

The slogan for 2016 is STORIES BEGIN, and I’d like to share with you how that slogan came to be.

QCT has an obligation to produce work that is new and exciting for both our actors and our audiences. This may include a show that has garnered national attention because of its premiere on Broadway. And because of our resources, we are in a position to nurture original work and become an incubator for a new piece that could easily have a life beyond Quincy, IL, and we can say, “it all began with us.”

After the season was selected, I realized that they all had two common traits: 1.) more so than most stories, they deal with the idea of society and especially a sense of community; and 2.) some sort of drastic change forces the end of a character’s world as he or she knows it, therefore, to quote a character from last summer’s musical, “Another story must begin.”

The theater of course is a place for storytelling. As we tell one story on stage, a different story is happening backstage, and that’s the forming of a new family or a new community…or perhaps another way of thinking about it would be the growth or expansion of a family or community. Each cast and crew brings a different energy into the building, and it’s up to the individual’s attitude and work ethic to decide how he or she wants this story to develop.

Perhaps you’ll hear a title that will excite you because you’ve heard of it before and maybe have already seen it; or perhaps you’ll be excited to work on something because you haven’t heard of it and you can say you were a part of something new and different. But more than any other reason, I hope that you will join us in 2016 because of the opportunity to put aside the individual and be a part of a something greater than yourself, join a group of people who shares a common goal: the desire to tell a really good story.

It’s now time to announce the slate of shows for 2016, thus another story must begin.