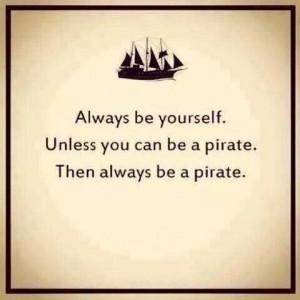 This morning, I walked into my office to find a half-finished peg leg waiting in my desk. Ah, a life in the theatre…

Much like that peg leg, the pieces of our production of TREASURE ISLAND are starting to come together. Technical director Paul Denckla, in between his scenes as Blind Pew, has completed large portions of our pirate ship set. The cast has been able to use its many levels, stairs, and trap doors in rehearsal. Costume designer Connie Phillips has started fittings with the actors, and they look fantastic! Our dynamic box office staff has been fielding many phone calls since ticket sales opened – so many calls, in fact, that we’ve added a matinee performance on Saturday, October 24th!

But there’s one big item I can now cross off my director to-do list; in rehearsals, we’ve finished blocking the show. That’s right; the actors now know exactly where they’re supposed to move onstage for the whole play. Learning blocking is a significant part of the rehearsal process, but what do you do once that’s learned?

Tonight we’ll start cleaning the show. That means we’ll do bigger sections of the show (about half of it at a time), stopping and starting as needed, to make sure we remember everything and to get a feel for the show as a whole. Sometimes I might have to adjust or change blocking. The cast and I will try to work more details into their performances. We are building the foundation of a show that will be consistent, polished, and engaging for our audiences. For me, this is a really exciting part of the rehearsal process. By this point, the actors are getting more comfortable in their roles. They know their blocking and have most of their lines memorized. This is the part where they get to experiment to find the best version of their characters.

To me, one of the biggest challenges of being an actor is finding a way to make your performance feel new even after you’ve done it dozens of times. (For professional actors, that can be hundreds or even thousands of times. Whoa, right?) In fact, the actors asked how to accomplish that task in our very first rehearsal. I wish I had a magical response to make it sound easy, but here’s what I told them: Your lines will stay the same every time, your blocking will stay the same every time, but everything else is fair game. Finding the “everything else”, and what options that might include, is what we’re doing as we clean the show. It’s no small task, but will be worth all the effort.