A Day in the Life of a Community Theatre Actress 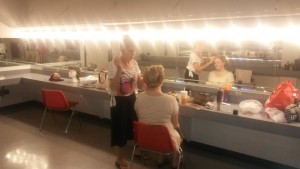 Auditioning for a role in a community theatre production requires courage… The anticipation. The preparation. The nerves!

Accepting a role in the cast requires commitment…The time – six to seven weeks of studying, rehearsals, and productions. The energy – and that has never been more apparent to me as in this very physical, very energetic farce! The sacrifice – missing some social activities and changes in your daily routine.

Becoming your character is a transformation. The costume, the hair and makeup, the posture, and in my case the dialect of an Italian woman of the 1930’s. These are things that follow me out of the theatre when I leave and I carry them with me throughout the day. Similar to learning a foreign language, everything you see and hear is “translated” through the eyes of your character. Common everyday phrases are related back to the script. You hear a line that is spoken by another character, and you automatically reply with your line.

A co-worker attempts to print a brochure and it doesn’t come out right. I respond to the printer with “One-a more chance, eh? One-a more chance, and that’s it!” as Maria says in Act II. I meet someone named John, and immediately think, “My husband would like-a the john. He throws up!” And, when my knees remind me that I’m not as young as I used to be, I chastise myself with “So — take-a you pills!”

But as much as these things are the personal elements – commitment, sacrifice, character transformation…the end result does not happen without total collaboration from everyone involved. Trust – that your fellow actors have your back; that the lights/sound/crew/stage manager are on top of the cues; that the director is giving you feedback to improve your performance and make you “shine.” Respect – for the time that everyone else is sacrificing; for their interpretation of their character; for the ways in which they respond to your character. Intention – that we all come with a willingness to give our best performance yet – every night. And the connection with the final element – the audience.

When all these things come together in sync, then a day in the life of a community theatre actress is exhilarating! And when the curtain closes on this show… I can’t wait to start all over again!