Skip to content
Home » Blog » There’s Something About Mary

There’s Something About Mary 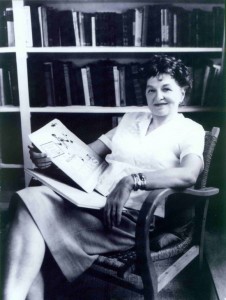 “First of all, I would like to make one thing clear.  I never explain anything.”

Mary Poppins blew in on the East Wind. Where did she come from? Where was she going? Who is she? Only author P.L. Travers knew the answers to these most prominent questions, and she liked keeping it secret. She also liked hinting at the history of Mary Poppins and of her character’s origins, always keeping her readers on their toes.

Travers built Mary Poppins around the construct of a woman’s three phases of life: the maiden, the mother, and the crone. Mary’s vanity and humor comprised the first tier, while her sensitivity and caring made up the second. Finally, the crone phase is not some frightening old witchy woman, but rather someone who had “gathered up all the threads of life, and all they’ve found and known, and had it there as wisdom.” She believed that every female fairytale character, heroine or villainess, exemplified these stages and reflected the true meaning of being a woman. A woman could always find a character like herself in a fairytale, which is why Mary is such a beloved one. She’s lovable because of, not in spite of, her sternness and wisdom.  Even stubborn Mr. Banks yields to her authority. She holds her own and possesses so much humanity that she transcends beyond it.

P.L. Travers, like many authors, took inspiration from her own life when penning her books, although she says there was no one remotely like Mary in her life. One can see a little of Travers herself in the character of Mary, primarily through her loving strictness. It is perhaps through her loneliness that Mary Poppins takes root. As a young girl, Travers spent her time playing with her peg-doll (which became the basis of Mary’s appearance) and daydreaming about fantastical adventures she would never take. Mary was a way for her to experience those. At the end of Mary Poppins, Mary vanishes into the night sky, an allusion to the death of her father. Her mother had said her father had “gone to God,” the impact of which Travers didn’t truly experience until many years later as she gazed up at the heavens. She imagined her father transforming into a star, much like Mr. Banks believed Mary had done. Her aunt Helen Morehead, affectionately known as Aunt Sass, also provided a muse for Mary, albeit an unconscious one. “Imagine a bulldog whose ferocious exterior covers a heart tender to the point of sentimentality,” Travers once said of her beloved great-aunt. Morehead took the Goff family in after the death of Travers’ father and became a pillar in the young woman’s life, much as Mary did for the Banks children. Travers also drew from literary favorites from her childhood, including Alice in Wonderland, Peter Pan, and Jemima Puddle-Duck.

The joy of Mary Poppins is in its mystery, just like its heroine. We will never know all the secrets of her adventures, but that’s just the way Mary would want it: always keeping us on our toes.