“Describe your scene, What is going on?” is an instruction you may hear between a director and an actor so that each can understand the actor’s choices in a scene; their perspective, so to speak. The director may hear responses that range from 3 words to 50.  Interiors, exteriors, the weather, clothes, and even smells may be important in describing what is about to happen.  I’ve often thought that children are the best at describing what is around them because of there being no pressure to use elaborate phrasing. 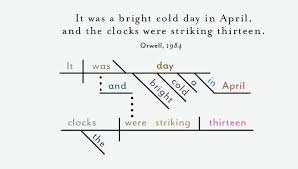 As a fan of words, despite some of my grammar and spelling applications to the contrary, I always look forward to the winning entry of the Bulwer-Lytton fiction writing contest.  Edward George Bulwer-Lytton wrote the novel “Paul Clifford” in 1830 beginning with the sentence, “It was a dark and stormy night; the rain fell in torrents — except at occasional intervals, when it was checked by a violent gust of wind which swept up the streets (for it is in London that our scene lies), rattling along the housetops, and fiercely agitating the scanty flame of the lamps that struggled against the darkness.”  The contest challenges entrants to compose bad opening sentences to imaginary novels and takes its name from the Victorian novelist George Edward Bulwer-Lytton. Entrants are encouraged to not go over 60 words.  Entries are to be submitted by April 15th but the deadline is June 30th.  (See, I love these kinds of rules!)

MARY POPPINS is our next production and is now in rehearsals at Quincy Community Theatre.  The performances are July 16th through July 26th, 2015 on the Main Stage.  Tickets will go on sale June 22nd.  I am looking now for the perfect first sentence to use in promoting our ticket sales opening day.  That sentence needs to describe, educate and inspire people to want to come see MARY POPPINS.  I challenge all of you to submit your ideal (but not necessarily bad) sentence for us to put on our promotional material.  Be original, fun, succinct (up to a maximum of 60 words), and descriptive in a bad, yet interesting sort of way.  Submit all entries to qct@1qct.org by around June 18th.

So I leave with the words of the 2014 Bulwer-Lytton Contest Crime Story Award winner, Joshua Long from Harrison Ohio, “Hard­boiled private eye Smith Calloway had a sinking feeling as he walked into the chaotic crime scene, for there, as expected, was the body dressed in a monk’s habit; there was the stuffed cream-colored pony next to the crisp apple strudel; there was the doorbell, the set of sleigh bells, and even the schnitzel with noodles – all proclaiming that the Von Trappist Killer had struck again.”

Exactly! That’s why he was the winner.   Let’s be careful out there.  I mean it.