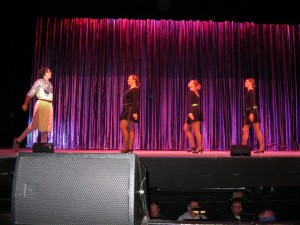 Here comes the show. No more rehearsals. It begins. I am…so very tired.

Enthusiastic, though. Stress is only natural, but I went through it last week. My nerves were frayed, my spirit crushed, my emotions drained away. I tried to fake my way through rehearsal, go through the motions, but it didn’t work. People noticed. When my enthusiasm magically came back, another natural part of the rehearsal cycle, people noticed that as well.

You know, Quincy theatre is so well-done that it’s easy to forget that it’s community theatre. It feels like Broadway. I’ve often said that during my years as an audience member, and that goes double now that I’ve seen it from the other side. And to think, everyone you see onstage has a day job. I don’t know how they do it. I’m off work for the winter; all I do when I’m not working on the play is rest and try to recover from the emotional toll that rehearsal takes, and it’s never enough. So, hats off to my cast mates. Excellent job, folks.

There have been a few mishaps along the way. The Holy Grail is a real diva: constantly missing its cue, the big sparkly wanker. And a few coconuts and umbrellas have tragically died in the line of duty. But we plow through in rehearsals, as we would in a real performance. 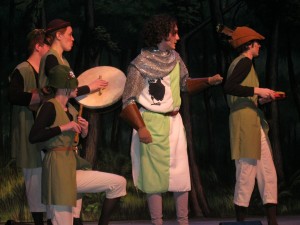 The only thing that slows the show down is when someone forgets a line – not a problem in itself, as most actors can motivate the scene to proceed without missing a beat. But when someone feeds ME the wrong line, I’m left to just mutter helplessly until someone rescues me. Improvisation? Me? Forget about it. Can’t do it. I don’t know what happened; I used to be the breakout star of an improv group, but somewhere down the line I lost my spontaneity. All of it.

So, while I’m here, I’d like to thank my fellow cast members for a great time. Also a whole bunch of other people with various technical designations; lest I forget one, let’s call them everybody who’s not cast, without whom the cast would be nothing. Thank you all as well.

Anyway, I must concentrate on preparing for the show. Why am I hanging around writing blog posts? There’s no time for that.

It has been an honor guest-writing for the QCT blog. As soon as the show is over, I’ll be off to Wisconsin, back to my normal life, and you won’t be seeing me around these parts for a long, long time. But I’ll always remember that fate led me here to do this. I’ll see you on stage.