Skip to content
Home » Blog » A Brief History of SPAM

A Brief History of SPAM

I first discovered Monty Python and the Holy Grail at the age of 12 among a large collection of DVDs. It was a very big “special edition” sort of DVD case, so it caught my eye. I don’t remember what I was expecting, but what I saw was…life-changing.

It can be difficult for a person to appreciate the groundbreaking phenomena of previous generations. For instance, the first Star Wars film can be hard to take seriously since literally every moment of it has been mimicked and parodied to death by one thing or another. So I was lucky in that I hadn’t yet seen the myriad of ways Python had changed our culture. I could see it for what it was: something shockingly original and brilliant.

I did some research, wondering who these delightfully strait-laced British actors were. I knew the names John Cleese and Eric Idle, but hadn’t spotted them. (I was rather face-blind as a child; a change in makeup or hairstyle made a person unrecognizable to me). Fortunately, there was a feature on the DVD for identifying the actors – and when I discovered it was just six guys playing nearly all of these characters, my love for the film skyrocketed. Michael Palin with his dozen characters quickly became my favorite Python. I’d always loved actors versatile enough to play numerous roles and I’d never seen such a thing outside of cartoons before. 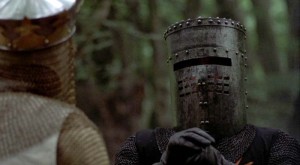 Holy Grail began to consume my life. Subtly, the way it’s consumed Western civilization. With my Nerf sword, I would practice fencing maneuvers against a large ornamental bird in the garden which I called the Chicken of Bristol. My little sister and I would reenact the Black Knight scene…though she would never let me say the lines, she just hacked all my limbs off, finishing by cutting off my head. Don’t look at me like that, I was a fantastic big brother. I can’t imagine what issues she was working out.

Over the years, I started collecting more material from the Python catalog, building up knowledge little by little. SPAMALOT came to Denver when I was 15, and you’d better believe I went. What a show! To think that all the familiar old Holy Grail routines could actually make an audience laugh! It made my spirit soar. I got an “I’m Not Dead Yet” t-shirt from the souvenir stand, and “I’m All Alone” remains my favorite song to sing whenever I’m …alone, funnily enough. 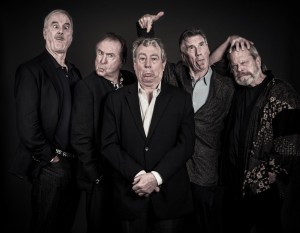 The Pythons reunited last year for an anniversary show called Monty Python Live (Mostly), which I watched on YouTube as soon as it got there. They claimed it would be their final reunion show…I’ll believe that when they’re all dead. For now, I eagerly await the team coming together to play the alien villains of the upcoming Simon Pegg film Absolutely Anything…I have no idea when that comes out.

The influence of Monty Python is all around us. Among other things, they’re the reason we now say “spam” instead of “junk mail”…which the makers of SPAM don’t appreciate, incidentally. Sure, Python comedy isn’t for everyone – we’ve all had that awkward day of watching Holy Grail with someone who wasn’t remotely amused. But whether it’s Terry Gillian’s deranged animation, the never-smiling stone faces of Graham Chapman and John Cleese, the over-the-top hamminess of Terry Jones and Michael Palin, or Eric Idle’s thinly-veiled attempts to overshadow all the others, Python speaks to that part of us that wants to break away form the norm and do something absolutely crazy.

So here’s to the lumberjacks of the world, the albatross vendors, those who wish to learn how not to be seen, and, most importantly, all those dorky dudes who know all the best Python sketches by heart and recite them out loud when they have nothing else to say to each other. There’s no better bonding moment than that.