Skip to content
Home » Blog » The Fantasticks to Open

The Fantasticks to Open 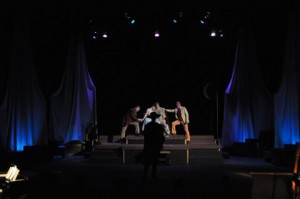 When I accepted the position as MAD at QCT, I was pleased to learn that The Fantasticks was one of the shows on the schedule for 2011. This is one of my favorite pieces of theatre. I felt that it was a perfect time to bring in a Guest Artist as a performer for the role of El Gallo, not because we couldn’t find someone capable of performing the role here, but that it is good exposure for our members to work alongside someone who is pursuing a career in the theatre.

It gives our members a chance to talk about their past as well as for our younger members to get some first-hand exposure to what it is like to be a working actor. I brought in Scott McGowan, who’s voice is warm and rich and his range is just right for the role. We also have a Fantastic cast of Patrick Regner as Matt, Libby Ruth as Luisa, Jim Rupp as Hucklebee, Kevin Jobe as Bellomy, Paul Denckla as Henry, Paul Wood as Mortimer and Sarah Anderson rounds off the cast as the mute. Catie Hellige serves as the stage manager.

In October 1980, the original production sold its millionth ticket becoming the longest running show in American history, and the longest running musical in the world. The Fantasticks eventually ran 17,162 performances at the tiny Sullivan Street Playhouse in NYC before closing in January 2002, after an almost forty-two year run (more than twice as long as Cats).

In the thirty-second year of its run, the show won a special Tony Award in 1992, and Schmidt and Jones won the prestigious Richard Rodgers Award in 1993. The Fantasticks is based on Edmond Rostand’s Les Romanticks, loosely using Romeo & Juliet as source material (Star-crossed lovers, Feuding Families) as well as other strong Classical influences. It was the beginning of the end of the Rodgers and Hammerstein revolution, and it paved the way for unconventional shows like Anyone Can Whistle, Cabaret, Company, Celebration, Promises, Promises, and others.

The Fantasticks utilizes the essence- the boiled down core of what makes musical theatre work. This was a musical born of one of the most fascinating periods in American history, the 1950s, when traditional domesticity was being challenged, when organized religion was being challenged, when the unquestioned authority of parents and other “experts” was being questioned, and when young Americans were becoming obsessed with individuality, with rebellion, with freedom, with art as a means to criticize social and political structures, and most disconcerting of all, with Modern Jazz. All this would find full bloom in the sixties, but the seeds were there in the 1950s with the Beat writers, when composer Harvey Schmidt and writer Tom Jones, two young New Yorkers were creating their masterpiece.

In order for The Fantasticks to succeed, it has to be real. It has to happen every night with nothing faked. The magic has to be real. It is cynical yet a clear-eyed view of Love and Marriage. Its simplicity allows us to connect with The Greater Truths. Its unconventionality allows us to let go of some of the the trappings of a big Broadway Musical and rejects conventions for convention’s sake such as the 4th wall and realistic sets…it is something very Pure, primal, truthful and in my opinion, beautiful.

Once again, I am so very pleased with the caliber of performances here at QCT and have had an enjoyable rehearsal process and hope you all have a chance to come support QCT and be entertained by one of the most enduring theatrical productions of all times! I hope you find the music, story and characters as charming and memorable as I do.