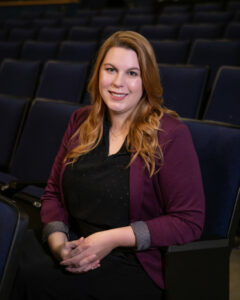 Wait, it’s August already? As the last few weeks have slipped away, so has my concept of time. Legally Blonde triumphantly took the stage to sold-out crowds in mid-July. We had precisely one day after the final performance before jumping into auditions for the next show. Last week we announced the brilliant cast for Calendar Girls as we were in the throes of our most intensive education program of the year, Triple Threat Boot Camp. To say there is always something happening at QCT would be an understatement.

And through all this, we’ve also been finalizing details for the 2023 season. I’m not going to lie; as I go through this process for the first time, it would be easy to get whiplash with how often my brain is switching gears as to which show, and even which year, we are talking about at any given time.

As a patron, I always look forward to the new season announcements. As they get closer, the buzz becomes palpable. There is excitement in the blank slate and the possibility it holds. Everything is on the table. As I wade into licensing agreements and budgets, I realize there are a few limits to what is on the table. For example, I can officially announce that neither Hamilton nor Wicked made the cut this year. (Sorry.)

Before I worked at QCT, I didn’t know just how early this conversation began. As our 2022 season was getting into full swing and the first mainstage adult show was taking the stage in April, we started our discussions for 2023. Brandon and Brendan think about what sort of stories they want to tell and get input. As we moved into early summer, our conversations switched to feasibility and capacity. As we also think about our 100th anniversary in 2023, we’ve also discussed what special “extras” will be a part of the new season.

And then, the conversation switches to budgets, contracts, and calendars. (We’ve spent A LOT of time looking at calendars as we try to make everything fit and avoid conflicts.) There is the process of applying for rights to shows (and then making adjustments and applying again). And while we are getting very close to having our slate of shows finalized, the hard work is just beginning as we work on the marketing and branding, seek out sponsorships, and prepare our box office to start selling season tickets.

It sounds like a lot because it is. But even in the thick of it, the excitement is still growing. Every time another detail falls into place, every time we look at a mocked-up logo, every time I get another contract to look over, I get a little more excited about what is to come (…well, maybe not quite as much for the contracts.)

I can’t wait to share what we’ve been working on in a few weeks at our season announcement. I look forward to going on this journey with you. And in the meantime, we will see you at our three remaining incredible shows in 2022.