Skip to content
Home » Blog » Introducing the cast of MAME!

Introducing the cast of MAME! 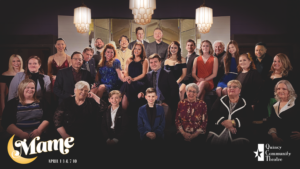 Fall in love with live theatre all over again as Quincy Community Theatre presents the classic Broadway musical, Mame, April 1-3 and 7-10.

When young Patrick is plucked from his rural upbringing in Iowa to live with his wildly enthusiastic New York socialite Auntie Mame, he swiftly learns that “Life is a banquet, and most poor suckers are starving to death!” Mame’s captivating optimism and zest for life endear her to (almost) everyone she crosses paths with. Packed with musical theatre classics, such as “It’s Today” and “We Need a Little Christmas,” Mame will leave you feeling exhilarated and full of hope!

A cast of 28 exuberant performers, 11 of whom are making their QCT stage debuts, bring Mame’s party to life right before your eyes with over 200 costumes, twelve show-stopping musical numbers, and a host of other rousing surprises!

Director Brandon Thomsen says, “Mame is the encapsulation of everything that people love about musicals: the songs are catchy, the characters are a little wacky, it’s fast-paced and funny, and at its core is a tender relationship that we root for. Auntie Mame is the spirit of resilience and of community, two themes that are worth celebrating right now.”

Mame is under the direction of Artistic Director Brandon Thomsen, with vocal direction by Alison Stonecypher, choreography by Alison Shafer, scenic design and technical direction by Seth Campbell, lighting design by Scott Monnin, costume design by Valerie Hernandez, and stage management by Ellen Taylor. The live orchestra will be conducted by Dan Fry.

For those who are eager to get a taste of Mame’s banquet, QCT will host Discovery Night on Monday, March 21 at 6:00 pm. This free event invites the audience backstage to take a look at the process of bringing this story to life. See the costumes, set pieces, hear from the director and designers, and watch a portion of the rehearsal. Please RSVP here to attend this event.

Audiences are invited to continue the conversation and meet the cast with a question-and-answer session following the performance on Friday, April 8. The Talk Back will also be live-streamed on the QCT Facebook page for those who are not able to attend in person.