I recently had the pleasure of sitting down with our dedicated volunteer, Carol Whaley to talk with her about her volunteer experience here at QCT. 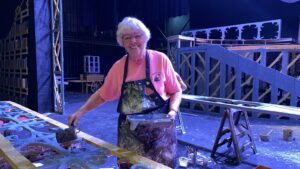 Tell us a little bit about yourself, Carol.

I married my husband Ken 55 years ago. We’ve been very happy and have two children. We have two grandchildren and a great-grandchild right now. After working, we helped to raise our granddaughter.

What made you decide to volunteer at QCT?

Kids grow up, and I didn’t have anything else to do except sit at home. I wasn’t about to just sit around and wait to die, so I came down here one day and they were working on Phantom. I just walked in the back shop door, and there were two people in there painting and I said, “Do you need painters?” They looked at me like I was some kind of a creature that walked in! They said, “You have talked to Lorne”, I said, “Who’s Lorne?” Then a guy came walking around and they said, “This is Lorne!” I asked if he needed painters and he said, “Yes. Come with me.” That’s the way the whole thing started. I’ve loved every minute of it ever since.

I worked in an office for 26 years. If I had known I could do this type of work and make living, I probably wouldn’t have worked in the office. But when I was younger, there were not a lot of opportunities for girls. About the only thing that was around then was Walt Disney, and you had to go to California for that, and I wasn’t about to leave home.

Did you come to see shows here before you volunteered?

Yes. I was never into the theatre, but I never realized there was so much talent in Quincy. When my granddaughter Ray-Ann was little, about three years old or so, I thought it would be something for us to do, so I bought tickets for a show. I don’t remember what the show was, but it was a show for kids. She enjoyed it, she liked it, so I enjoyed it. We went to every child’s show after that. My daughter was not interested in going, so it was just me and my granddaughter. It was just a special bond between us, and it is still now.

What keeps you coming back to help?

I think the satisfaction of seeing something that I helped create. That is so exciting for me! I can see it as it’s being created, but then to come to the show, and actually sit in the audience and hear other people “oohing and ahhing” and all of that. No one knows who I am, but I just feel really proud. I just feel great satisfaction, I guess.

I would really like to continue to do this, as long as I’m able to do it. I’m 76. So as long as I’m able to crawl around on the floor – I don’t do ladders, I have always had a fear of heights. I’ll go up the steps, or a platform that has a rail, but other than that, at my age, I don’t think I need to be going up and down ladders.

Is there a show that you’ve worked on that stands out to you?

Not really, I think there’s something special about every one of them. I enjoyed Chicago, just because I got to distress a piano. With every show, there’s something different that I’ve learned. I learned how to create hardwood floors on a piece of just plain old board, how to distress a freight car, and some of what we’re doing now for Beauty and the Beast, working with the Styrofoam. It’s interesting because I never would have thought about Styrofoam. That’s the whole thing – illusion, illusion, illusion. There’s a barrel back there right now, you could pick up with one hand. A barrel! Because it’s made of Styrofoam. You can’t pick a wooden barrel up like that! But people don’t realize that and it’s because it’s done so well. But every person, all three of the people I’ve been fortunate to work with here with have taught me something.

I just want people to know, that after 55 years of marriage, my husband Ken is really good with this. He encourages me, and that’s a lot to say when you’re down here putting four or five, six hours a day. And he’s helpful at home. If I asked him to do something he will. We’ve had frozen pizzas sometimes for supper and sometimes I make a big supper. I feel sorry for him because sometimes he’ll just have sandwiches for lunch. But, he knows and he sees how much it means to me.