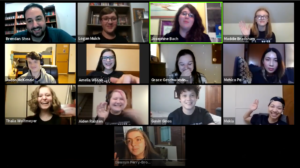 One the most gratifying moments of directing our virtual student theatre production of She Kills Monsters: Virtual Realms came during the live Q&A that followed the premiere on YouTube. In response to a question about virtual theatre, a student performer shared that– despite having never gathered in-person throughout the whole process– she still felt a deep connection with her fellow ensemble members. That camaraderie, that feeling of striving toward a shared goal, the sheer humanity that live theatre affords us…how could it be possible to maintain that “vibe” from behind a computer screen? And yet, here we were; here was a cast of young artists, buzzing with excitement following a successful debut, giving each other heartfelt kudos, making plans to meet up later on an online game. It all felt so familiar. The only difference was that we were all in little Zoom boxes.

Qui Nguyen’s unabashedly nerdy coming-of-age drama She Kills Monsters deals with escapism, bullying, identity and acceptance. But at its core, it’s a play about loss and what comes after. Existentially, financially, personally– we’ve all experienced some sort of loss in 2020. And so, as the play’s protagonist Agnes embarks on her own (unusual) quest to process her grief over her sister’s sudden death, we grieve with her in real time. We cheer her on as she vanquishes the dragon Tiamat– that monster of self-doubt, of stagnation, of giving up– and discovers a way to carry on within a “new normal” reality. It feels familiar.

Towards the end of the play, Agnes reconciles with the spirit, or memory, of her deceased sister Tilly. Agnes laments that Tilly is “gone,” only for Tilly to respond:

But…this story remains. And isn’t that essentially all life is– a collection of stories? …This story came from my soul and by breathing life into it, who knows? Maybe my soul gets a chance to breathe for a moment once again.

In addition to perfectly framing Agnes’ journey throughout the play, Tilly’s words also send a powerful message about the utility of art in an age of pervasive loss and irresolution. Far from a mere distraction, theatre began as a means for us to “look again” at reality and, oftentimes, process difficult social issues like war or injustice. Whether the story is framed humorously, symbolically or through a more serious lens, the mere opportunity to take a step back and examine life from a critical distance is a golden one. And whether that opportunity is as a performer or audience member, on a screen or responsibly in-person– theatre truly does give our soul a chance to breathe again…deeply.