Like nothing heard before—original music created for THE CURIOUS INCIDENT 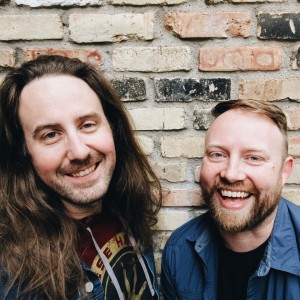 Quincy Community Theatre welcomes back Ben Larson to their upcoming production of The Curious Incident of The Dog in the Night-Time. Larson most recently worked with QCT as Music Director on March’s Phantom.

This time, Larson is joined by his studio partner Reed Reimer, to provide incidental music for the production. Incidental music in theater is similar to the music you hear when you watch a movie: it sets a tone or mood, transitions the audience from one scene to another, and sometimes—just like in a movie—it amplifies the emotional tone of an onstage moment.

Now based in Minneapolis, Reimer and Larson have been composition partners for over a decade. Their first collaboration was Maelstrom – The Zombie Opera, a romping hybrid of classical music, horror movie, and stage dramedy that premiered in Portland in 2009, garnering three Portland Area Musical Theatre Award nominations: Outstanding Original Musical, Outstanding Original Score, and Outstanding Set Design.

Since then, they have composed music for a trailer for the Hollywood film High Road starring Ed Helms (The Office) and Jo Lo Truglio (Brooklyn Nine-Nine); short films for The International Justice Mission, World Relief, and The Justice Conference; and music videos featuring rapper/poets Propaganda and Micah Bournes. They won Best Score for the short film Put A Ring On It at the Minneapolis 48 Hour Film Festival, and they scored the short film Meanwhile, At the Citadel of Superheroes…, winner of Best Film in Category at the 2017 San Diego Comic Con.

“We think The Curious Incident of the Dog in the Night-Time is one of the most powerful plays created in recent history, and we JUMPED at the opportunity to compose music for it. Christopher’s mind is so vibrant, so powerful, and so distinct…it was a joy and a challenge to get to know such a unique character and try to bring his sensory experience out of his head and into the auditorium for the audience to share,” praised Larson.

Their upcoming projects include a public release of their music for Curious Incident, a zany Halloween mashup video featuring a few local singers from Quincy, and a sweeping, unusual, top-secret Christmas album.

To keep tabs on Ben and Reed and stay informed about their latest news and releases, connect with them through the links below:

Are you curious to learn more about The Curious Incident of the Dog in the Night-Time?

SYNOPSIS
Christopher has an incredible story to tell — and it starts with the murder of his neighbor’s dog, Wellington. Determined to catch the killer, Christopher does detective work around the neighborhood. Based on the best-selling novel, this critically-acclaimed play is a moving and compelling mystery about a brilliant teen on the autism spectrum and the discoveries that change his world forever.

The Curious Incident of the Dog in the Night-Time is sponsored by Quincy Medical Group. QCT’s 2019 Season is sponsored by Gardner Denver. This program is partially supported by a grant from the Illinois Arts Council Agency.

Quincy Community Theatre (QCT) is a major theatrical resource for the Tri-State area, offering five major productions, three student productions, various touring performances, and a variety of workshops and classes each year. Showcasing local performers from the entire Tri-State Region since 1923, QCT uses the combined talents and resources of the community to celebrate, promote, and perform the dramatic arts in its first-rate facility. Quincy Community Theatre is a member of the Quincy Society of Fine Arts, the Illinois Theatre Association, the American Association of Community Theatre, and Arts Alliance Illinois. QCT is a 501(c)3 nonprofit. QCT programming is supported in part by a grant from the Illinois Arts Council. The 2019 Season is sponsored by Gardner Denver. QCT’s 2019 Media Sponsors are Arts Quincy, Herald-Whig, KHQA, Spectrum Reach, STARadio, and WGEM. For information about upcoming shows and classes or to purchase tickets, please visit www.1qct.org or call the Box Office at 217.222.3209.