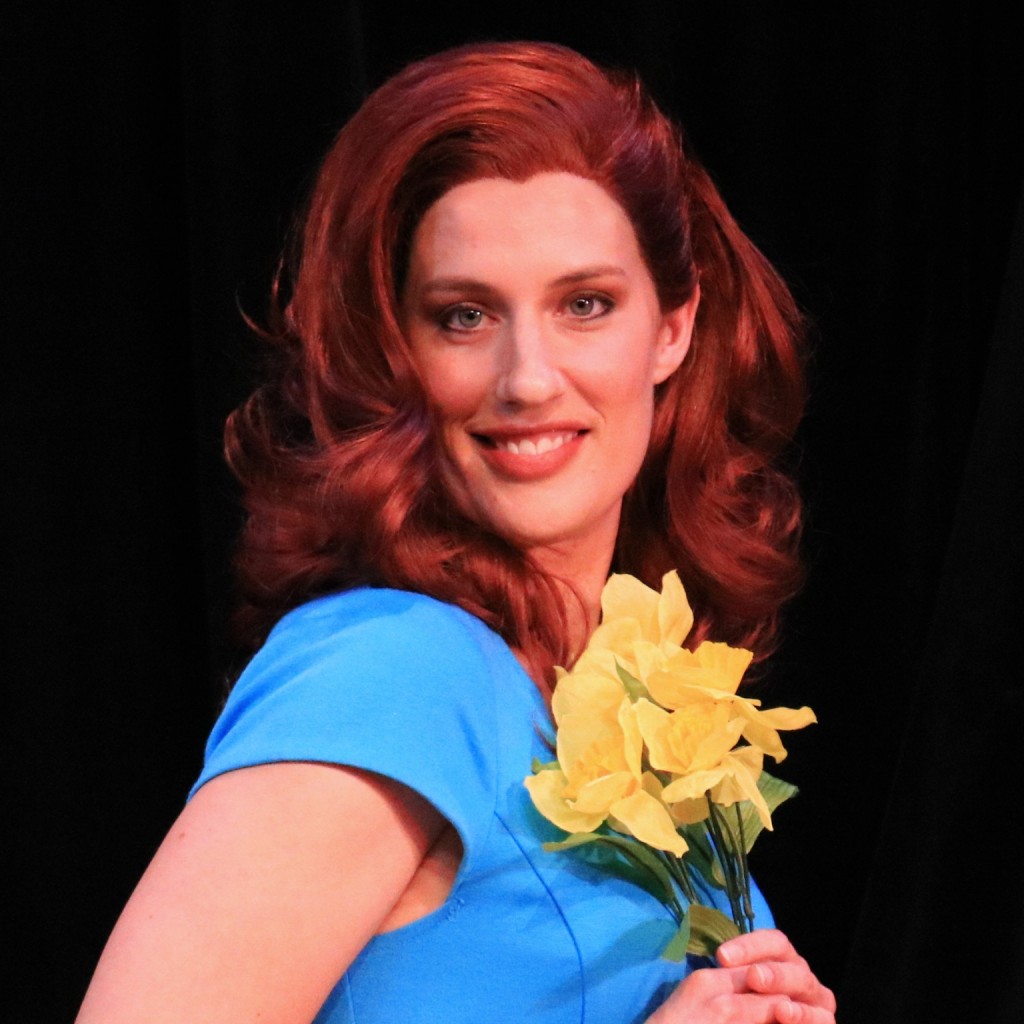 We’re starting this month’s spotlight with four simple words: We’ve missed Julie Schuetz. Next week, Julie will return to the QCT stage as Sandra Bloom in BIG FISH: THE MUSICAL. She’s kind, talented, enthusiastic—it’s no wonder we missed her!

Q: Can you tell me a little bit about yourself?

A: I was born and raised in Quincy, and I’m the second of five girls. I married my husband, Jim, the weekend after we graduated from college. We have three wonderful children: Evelyn, Evie, is 12; Isaac is almost 11; and Leo is 8. We have a puppy named Gus.

Q: How did you first become involved in theatre?

A: My first introduction to theatre was back when it was the “Little” theatre. I was in second grade. Deb Brown directed ALICE IN WONDERLAND. Everyone who wanted a part was cast, so we did multiple performances and had two actors for each part. I played the cook. My lines were “Too much? Too Little! Taste!” and “Tidy up and catch us!” I was a little unsure, but Deb helped me find my voice and I was hooked.

The first show I was in for QCT at the Oakley-Lindsay Center was IT’S A WONDERFUL LIFE. I had just moved back to town after law school. I loved that movie so much that I just hoped to get any part. Barb Rowell cast me as Mary. It was a great cast. I learned I was pregnant with Evie halfway through the rehearsals for the show. I had to take a hiatus while the kids were little, but did get to come back and played Lottie in the play ENCHANTED APRIL. I really loved that show.

Q: Why is theatre important to you?

A: There is nothing more thrilling than stepping into someone else’s shoes for a while. It is fun and a good way to get away from the stress of everyday life. But it is also a privilege to work hard to provide the audience with an escape from the stress of everyday life, too. Performing also reminds me that we just have this one life. We need to take advantage of every opportunity to learn, grow, and shine!

Q: What inspired you to come back for this story?

A: As a former English major, I love reading plays. For years, I’ve been reading all of the scripts for all of QCT’s shows. When I read this one I just loved the story. It sounds cliché, but reading it made me laugh and cry and filled me with that childlike wonder of “how are they going to do that” when I imagined all of the staging. I had never done a musical at QCT, so I needed a little encouragement from my kids to try out. I always sing while I do the dishes because that’s what I would do with my sisters when we were younger and had to do the dishes, so they told me to go for it.

Also, I had been trying to convince my kids to give the theatre a try since it was such a confidence builder for me. When I suggested my daughter try out for a musical, she responded, “You’ve never auditioned for a musical.” I told her that was fair and signed up.

Q: What has it been like coming back to the QCT stage?

A: It has really been so much fun. The cast, directors, props, costumers, hair, and production people have all been so wonderful to get to know. I love learning the choreography and learning the songs. It has been so interesting digging into the script and exploring the characters and themes. And who doesn’t love playing dress-up and pretend?

Q: BIG FISH has very loyal fans. What is it like telling a story that is so well known?

A: I have to confess that I never saw the movie or Broadway production before auditioning, so for me, it was just a lovely story that spoke to me. I know others love the other versions of it, but I’m excited to show them our interpretation. I know they will see how hard we’ve worked to connect to the characters and the story and will love it.

We’re telling this story with 12 actors and a set that is a series of levels. While there won’t be a stage full of people with elaborate set changes, the magic will be in the characters, the music, and the movement. It will be fun for the whole family. Kids will love the characters like the witch, the giant, the mermaid, and the crazy townspeople; the adults will love the story; and everyone will love the music and dancing!

Q: Who is Sandra to you? Can you find parts of yourself in her? How are you different?

A: I do see a lot of me in Sandra. It’s mushy, I know, but I think she is pretty madly in love with Edward even after years of him traveling to support the family, and I’m pretty madly in love with my husband even after 17 years, three kids, a dog, and a 10-year-and-counting historic home renovation. Sandra and I both get a little exasperated at times, but we always come back to feeling how lucky we are to have the men that we have. Also, Sandra is equally as enamored with Will even though he’s such a different person from his father. Having three kids who are all very much their own wonderful people, I also am enamored with my kids. The difference is, I don’t really have to convince them of the magic in their dad. He built them a two-story treehouse, so they pretty much think he is the best dad in the world.

Q: What do you hope audiences take away from this production?

A: I hope the audience recognizes the universal truths this show portrays. We are all human beings with flaws, but the relationships we form make the journey through life magical. We are all heroes of our own stories. And heroes are heroic; not because they are perfect, but because they keep trying, despite their flaws, to make life a little better for the people around them. Edward’s stories were the way he tried to make life more magical. Will was a reporter who used his realism as a way to share truths that would hopefully engage people into understanding. Sandra was a wife and mother who provided a safe, stable place, and worked tirelessly to help the two men she loved most connect.

Q: How do you hope your QCT story continues?

A:  I’ve had to take some pretty long breaks between shows, but every time I’ve managed to make my way back, it’s even better than I remembered it. Life can be busy and hectic, but taking a couple of months to work with an amazing community to make some magic will always be an experience you’ll never forget.