I was standing around the other day, minding my own business which I often do, thinking about this past year; both in the world and at Quincy Community Theatre. Not to go on like one of those old-time family Christmas letters, (which, by the way, I really enjoy!) but there are some significant things that are of note. If you would take the time, I’d like to hear yours, but until then I’ll start… 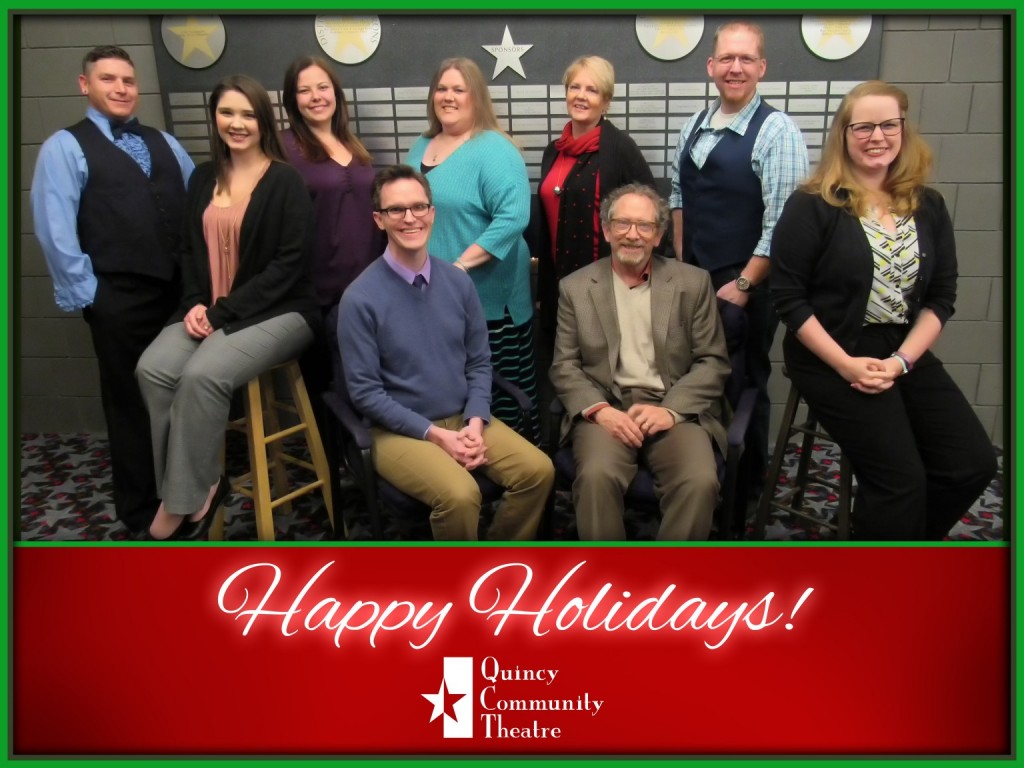 Just a few words about what’s happening with “old you know who.” The theatre is finishing its fourth season since I became Executive Director. Despite that, we are doing well. Opening 2018 with TARZAN was very exciting. The collaboration with QU sign language interpreting professor and students was energizing. All of the directors, designers, choreographers, and actors, Deaf and hearing, absorbed the characters’ look and movement. Together with great costumes and voices, they gave a beautiful rendition of the classic story.

From that theme, take a double clutching gear grinding change (ask your grandparents) and we go to our opening Season Ticket production: SWEENEY TODD. We held a red-carpet opening with KHQA that I hope becomes an annual tradition. Wonderful acting plus the set, lights, and even Sweeney’s friends (his knives) told this eerie and tragic story; enhanced only by the great voices and the orchestra’s presentation of Sondheim’s score.

Where does one go from Fleet Street? That’s right, the beach and the annual reunions of THE DIXIE SWIM CLUB. The characters brought to the forefront the realness of the humor and beauty of solid friendships, as well as the strength of an occasional cocktail.

Meanwhile on the road, AMERICAN FAIRY TALES, adapted by our own Kelsey Celek, was presented to many area schools and libraries.

No one stage was right for telling Jules Verne’s story of underwater intrigue, 20,000 LEAGUES UNDER THE SEA, so a submarine was created and the audience moved through the story. These young actors captivated us with their energy, their great steam-punk looks, and strong portrayals.

Have you ever wondered how many songs begin with, or contain the word, “Hello”? I would guess hundreds. Adele, Alice Cooper, Eric Clapton, Lionel Ritchie, Faron Young, the Beatles, Lady Antebellum, the Doors, and Jerry Herman have all had us at “Hello.” So we decided to have you at “Hello.” HELLO, DOLLY! was presented for the first time on the QCT stage in the OLC this past July. And yes, the audiences loved it. BUT, it was the building of this production that was a great experience. The camaraderie of the company, directors, orchestra, and crew combined with the colorful presentation made the telling of this story fun and magical. (And yes, I was in this show.)

OUR TOWN. OUR Town our TOWN (or however you say it) became your town on QCT’s stage. This true community production was well told and artistically poignant. It was great seeing new, returning, and seasoned community members telling this story. It’s actually the first time I had seen it onstage.

HARRIET THE SPY captivated audiences from the first few seconds. This story was wonderfully acted, showing connected scenes of moral lessons regarding values and choices. Many of the characters we have probably known in our own lives.

The show closing our Season Ticket series was SHE LOVES ME. It is a charming, funny, yet typical love story. Oh, you know, co-workers in a parfumerie irritate each other at work only to discover they really love each other, while their co-workers tell their own stories of love and angst—all the while proudly purveying parfumerie products to the picky townspeople. This version of the story was elevated by the beautiful songs and colorful staging. It was certainly an enjoyable production.

And our bonus this year was the bi-annual Cheryl Kaiser Dance Theatre production of THE NUTCRACKER. This is a great opportunity to see artistry in action. Every two years, these dance students beautifully tell this story on our stage through dance and motion. Our community is certainly blessed with talent and those practicing to perfect it.

Other than that, there is not much happening. We painted the house; our street’s been torn up for months; I probably have an exotic, incurable, and rare bronchial disease; and I have a new granddaughter named Margaret Katherine Daniel Conboy. Doing well indeed!

Stay safe out there!

Someone Hears Every Word>>