Right away I was excited about designing the new season logos because I love a challenge, and I love storytelling, and I love theatre, and I love art. This project combined all of them! I knew I wanted all the logos to have a look that made them fit together while still capturing, as succinctly and simply as possible, their respective stories.

I was intrigued with the idea of having one bold “identifying color” for each show because each of the stories are about identity. And I liked the cleanliness and drama of that black and white with one color as well. Thus all the designs are black lines on white with their respective pop of color. Choosing the colors was as simple as pausing to reflect on the main theme or look of each show, with input from both directors and the production manager, and it flowed quite easily.

Designing inside or with a circle as the primary guide speaks to the connectivity and continuity of life, generations, and relationships inside families, a central theme to most of the show. I wanted to reflect this cyclical foundation of society; families made and grow and made and grow, and creating in a circle was perfect for that. As a whole, I love the consistent “fit” and the colorful “flare” of these logos and am thankful that I could serve QCT in this way by creating the “face” of each new show! 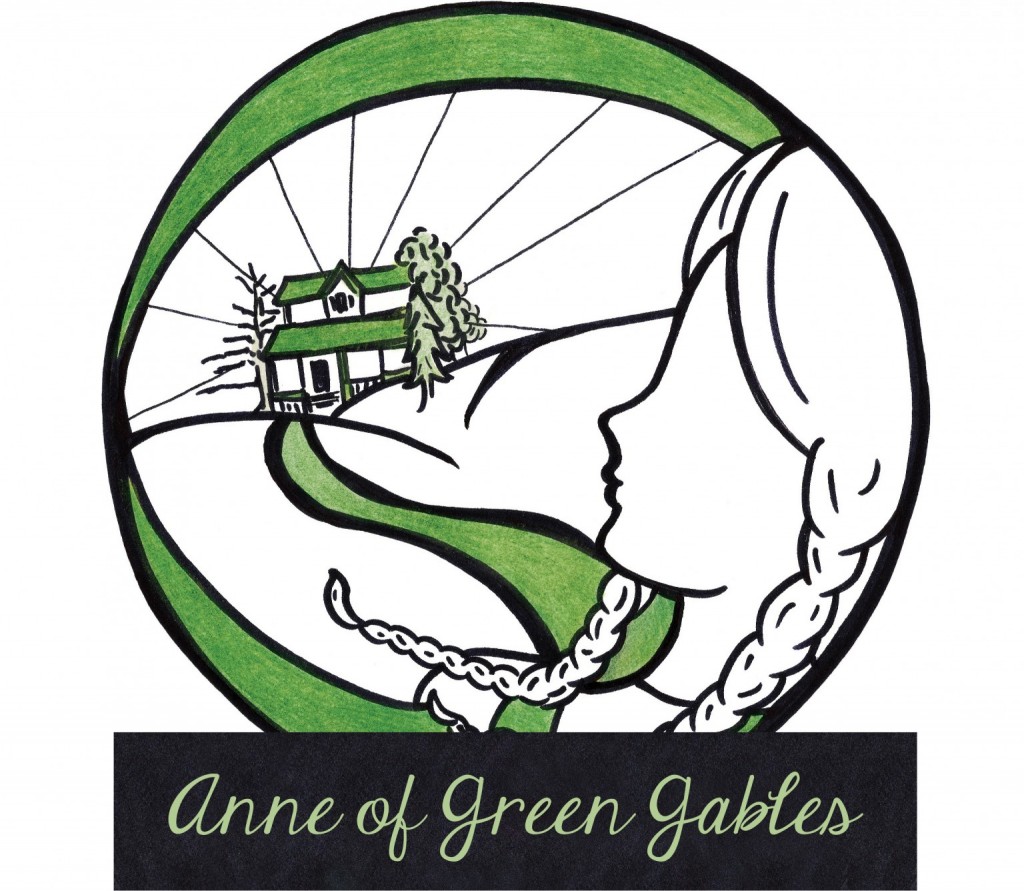 I have long loved this character and this story. I own all seven books in the series by L.M. Montgomery and read them every year. I wanted to convey a sense of the journey Anne goes on throughout the story and depict Green Gables as the safe harbor it becomes for her. My grandmother says it looks like my mother as a little girl, which is delightful to me. Though Anne is famously red-headed, I wanted a growing, nurturing green to be the focus of this design. 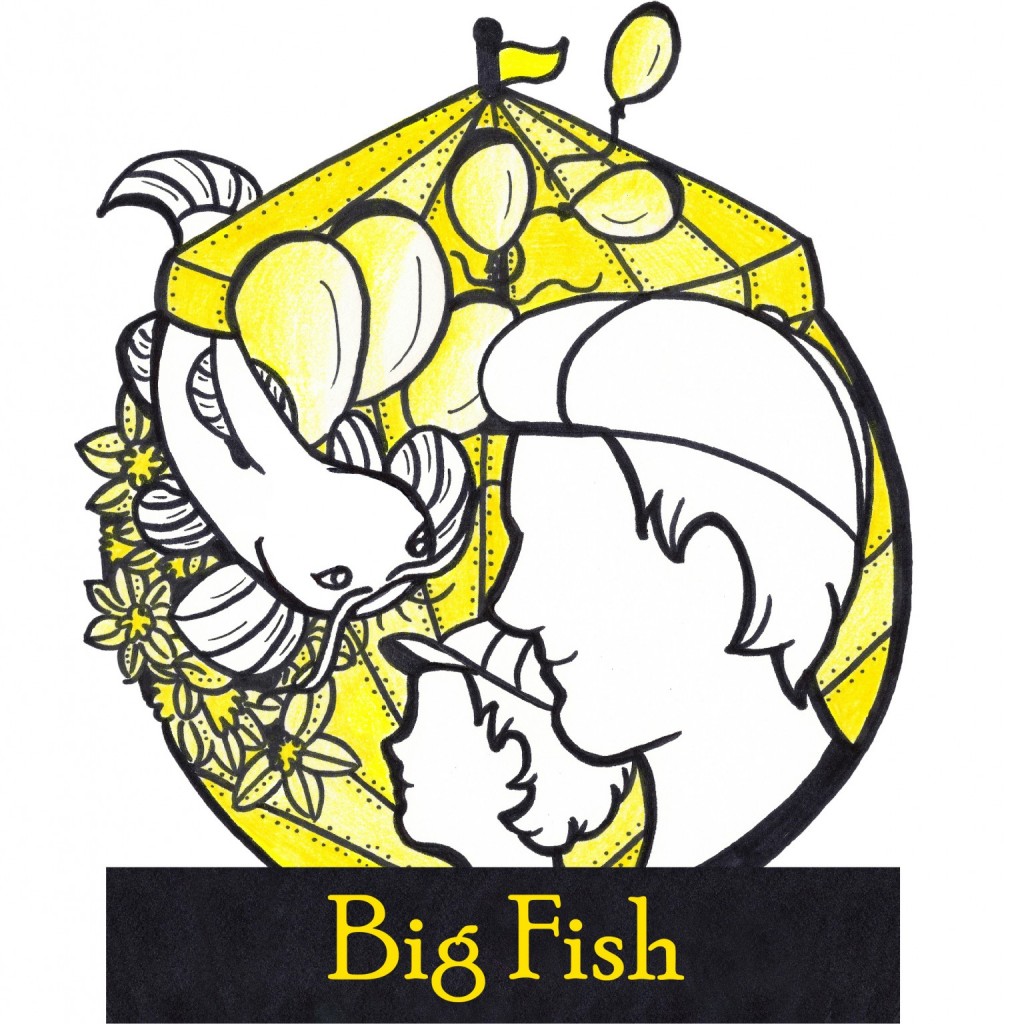 This is not a well-known book, movie or musical for some, but it was well-known to me from owning the movie. Edward Bloom’s personality and the tales of his life feel like a three-ring circus, larger than life. I wanted to play up this feeling of exuberance and whimsy. It was important for me that several key images from the story be involved, including the elusive enormous catfish, the circus he worked for, and the daffodils that win his beloved. Since the father/son relationship is central to the story, I put Edward and Will right down front, with them looking at all the fanciful items at a time when Will still believed his father’s stories. 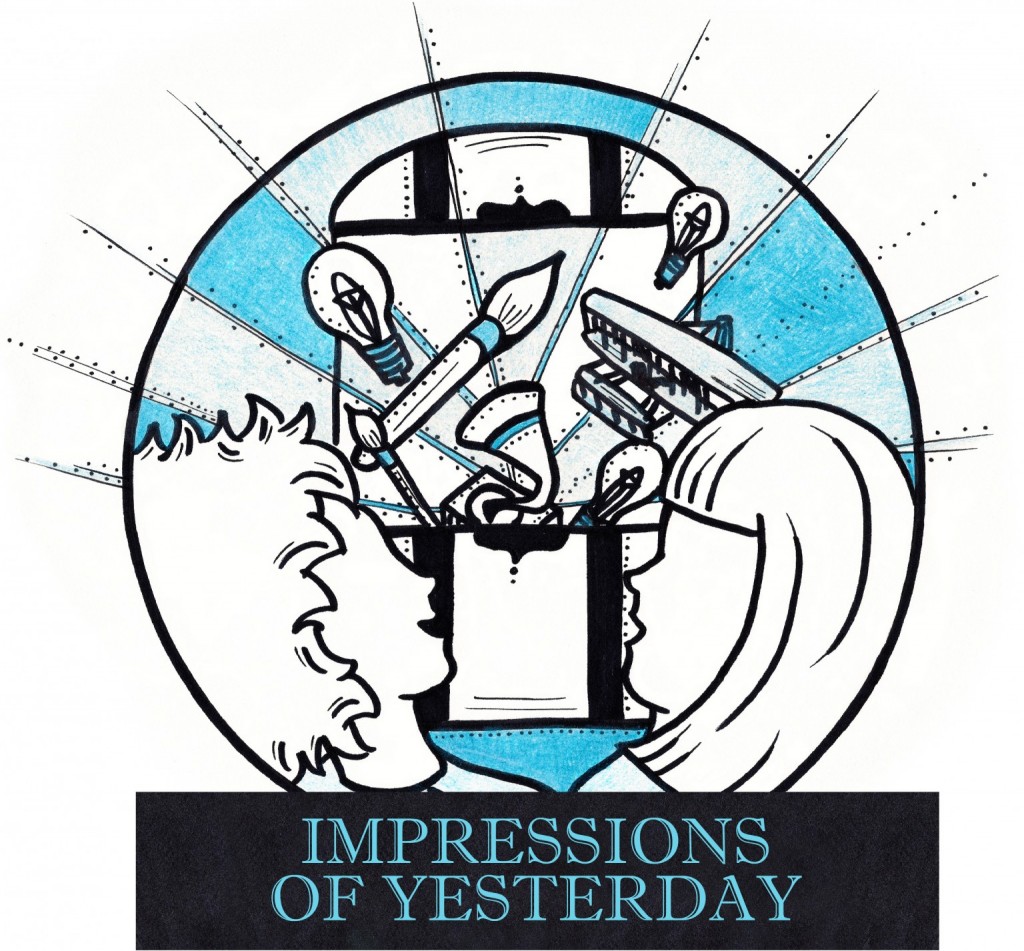 This was a fun and challenging design because of the detail necessary to capture all the items coming out of the trunk. I had fun utilizing some aspects of impressionist art, such as pointillism, and shading the Robin’s egg blue, to give a feeling of movement as well as magic.

Not having access to this recently-discovered script by Mark Twain meant I was working off of a Wikipedia synopsis and my own instincts. The dollop of paint on the brush creating the question mark pulled in the elements of art and mystery. Orange is such a vibrant color, and wasn’t akin to any of the other shows, thus is became the theme color for this vibrant farce. Because the character appears in drag claiming to be his own sister, I wanted a mirroring of the artist’s profile, and I wanted a really bold design for such a bold move the character makes in declaring himself dead. 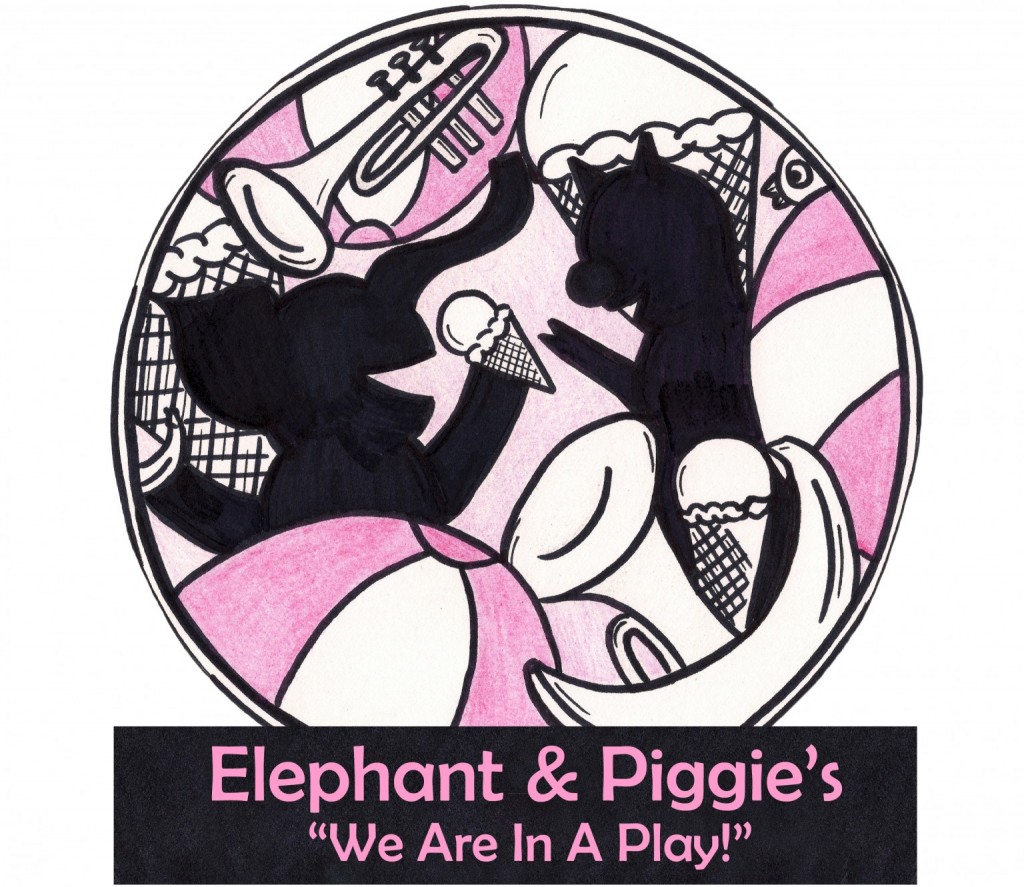 I’d never heard of these books nor read any, but I was delighted especially with the illusive Pigeon character. Thanks to Kelsey Celek for having a clear vision of the items she wanted bouncing around in Elephant and Piggy’s world, their playful pink beach balls and bananas design took shape! It was important for me not to try to recreate the illustrations of the books, but rather to evoke their essence in a fresh way.

We blue this cerulean blue was the “calling color” for the show and lends itself beautiful to the backdrop of the story, which is Greece, and the water/island setting. I was asked to incorporate the three potential fathers in the design, as well as a sense of the fun and exuberance of the ABBA music. I also wanted to show the relationship between Donna, the mother, and Sophie, the daughter, and their respective goals of protecting and discovering. Grecian elements of pottery and column design, as well as the glitz and glamour of the disco era, are echoed in the patterns ringing the outside of the circle. This is probably my favorite of the logos, if I was forced to choose. It was also the last one I did. 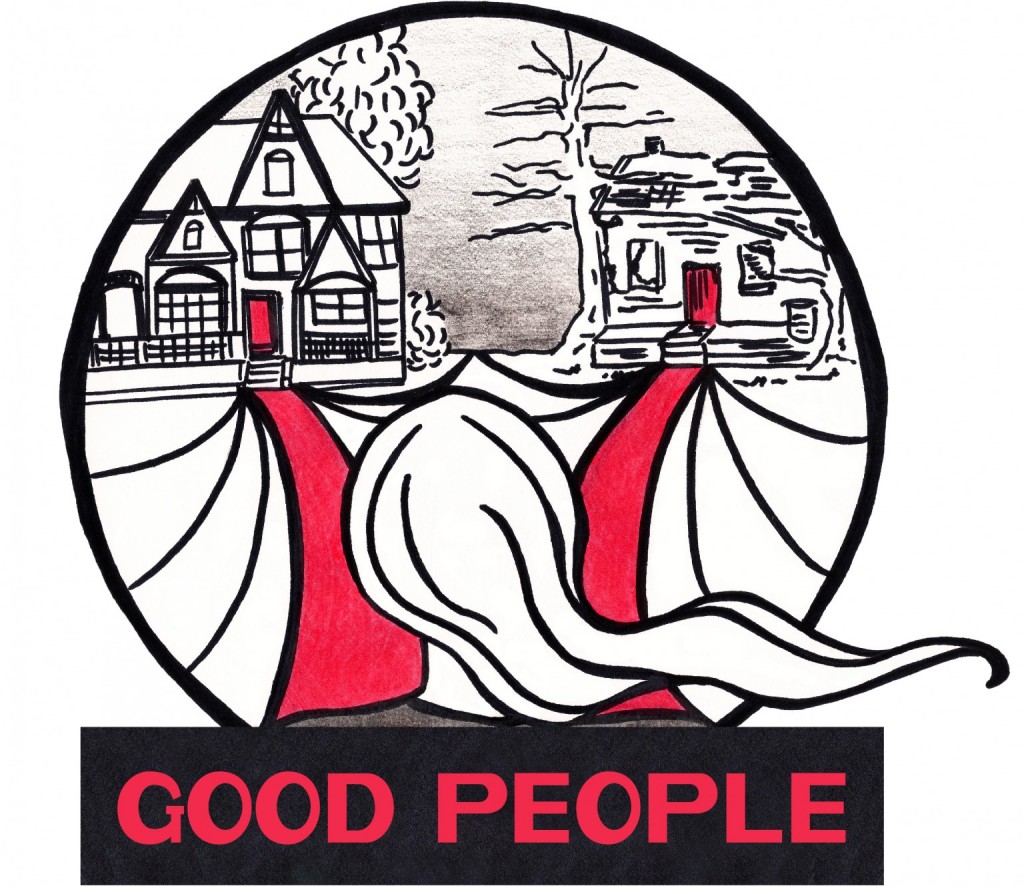 The play’s themes of difficult choices and circumstances, differing viewpoints, and contrasting lifestyles had to be central to the design of the logo. Red, a warning color, but also a color of passion and survival, seemed the obvious choice right away. This is also the only design that utilizes a fourth color; grey and greyscale are used to give depth to the background and texture to the central figure. The figure “blown by winds of change” is faced with two paths. Expressionistic rather than Realistic lines draw us into her conflict. 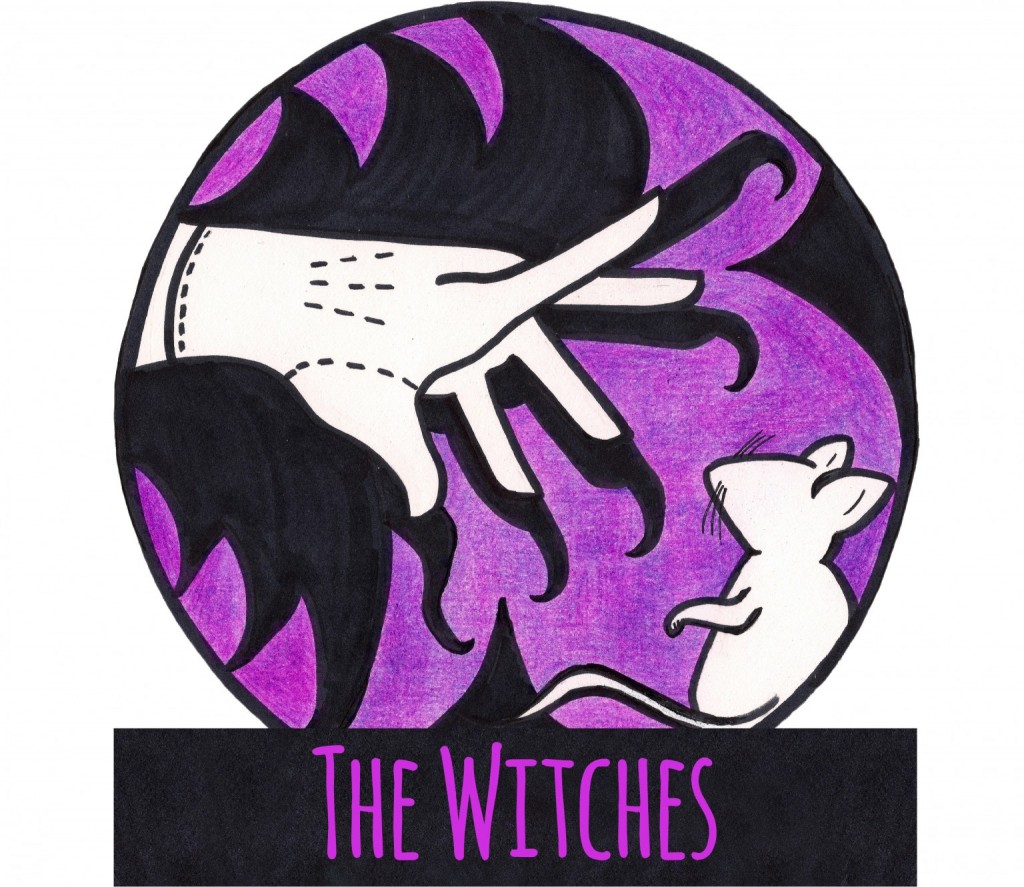 What better color for witches than purple? Evoking mystery, magic, the genius of Roald Dahl, and the Halloween season, this design was such fun to create! 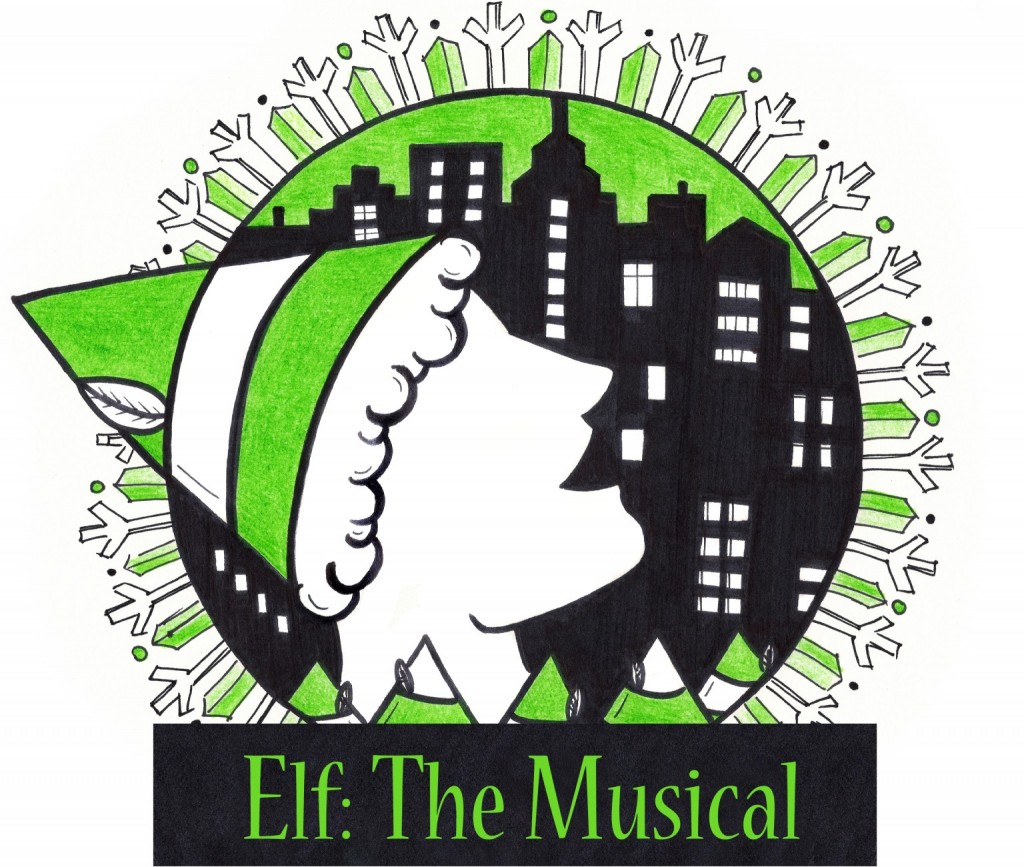 For the “big holiday musical” and a “big blockbuster movie” I wanted the ELF design to have big elements of festive fun and iconic images from the film. Notice all the little elf hats far below Buddy’s towering frame? And his curly hair and expression of wonder? With a child-like snowflake pattern ringing the circle, like an homage to the snow-globes he loves, and the NYC skyline as backdrop, this logo is unmistakably ELF!