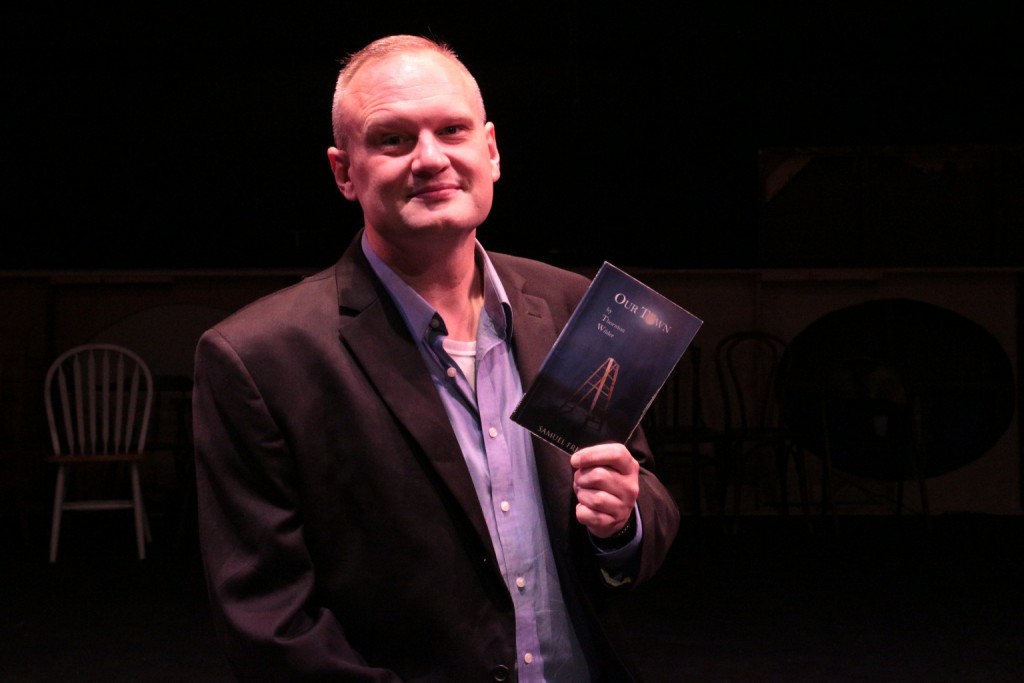 It is often said that the people of QCT put the “Community” in “Community Theatre.” I’m always fascinated by the diverse groups of actors who come together to make up a show. Some are repeat actors who have been in many shows, some are brand new to QCT. Local professionals, students, stay-at-home moms, retirees – these, and so many more, make up the fantastic teams that bring us wonderful shows each season. One such local professional made a recent return to the stage and in his second show at QCT, will be playing the part of the Stage Manager in OUR TOWN.

If you read the Herald-Whig, you might know that Jason Lewton is the News Editor. What you might not know is that Jason is also an actor. Jason is a relative newcomer to QCT. He was first cast in HELLO, DOLLY! this summer. While he is pretty new to QCT, theatre was a big part of Jason’s life when he was growing up. Jason grew up in Barry, but moved to Kansas City before sixth grade. He remembers that move was a bit of a culture shock, but over time, he found himself immersed in shows at Raytown High School. His first show was GODSPELL. OUR TOWN left a significant impact on Jason. It was the first show his Theater Arts class read in high school, and he’s been in love with it ever since. His love for the show grew as he played Joe Stoddard in his junior year of high school. Since then, he’s seen OUR TOWN in many other places, both professional and amateur.

Although Jason was engaged in shows in different places for a number of years, he eventually stopped. Several years later, with a little encouragement from Elizabeth Mannhardt and a coworker, Andrew Drea (Barnaby in HELLO, DOLLY!), he returned to the stage and is forever grateful to them for their gentle prodding. “I think I’ve realized a great deal how 19 years of not doing something you love is too long. Acting and performing once was such a fundamental part of my life, and I think I stopped appreciating that fact. I certainly have become aware of that, and am not taking a moment of this return to the stage for granted.”

Being cast as the Stage Manager in OUR TOWN is both exciting and challenging. As with most major roles, there are challenges, and Jason’s biggest challenge is the volume of lines to be memorized. But, even with that challenge, there is much he is looking forward to. “I’m excited about the role because I think the show brings such a powerful message: that we need to stop and actually take in all the wonder around us and really see those people in our lives who we love and hold dear.” His favorite aspect of the role is that the Stage Manager “KNOWS something, and he is trying to share it.” Traditionally, the Stage Manager is played as an elderly New England gentleman, but QCT is taking a bit of a different approach, allowing this Stage Manager to take on certain aspects of Jason’s own characteristics. “It’s a lot of me in the role, and I think, given my own personal story, it is helping me understand much better the depth of the role.”

Jason has a lot to do in the next few weeks, but he is looking forward to sharing OUR TOWN with the audience.  He wants everyone to know how much your support means to everyone in the show.  “It’s a magical experience, this putting together of an icon in the American theatre, and it’s an honor to have such a supportive and appreciative community to take it in.”

The Way We Should Be>>

OUR TOWN. Every Town. Your Town.>>