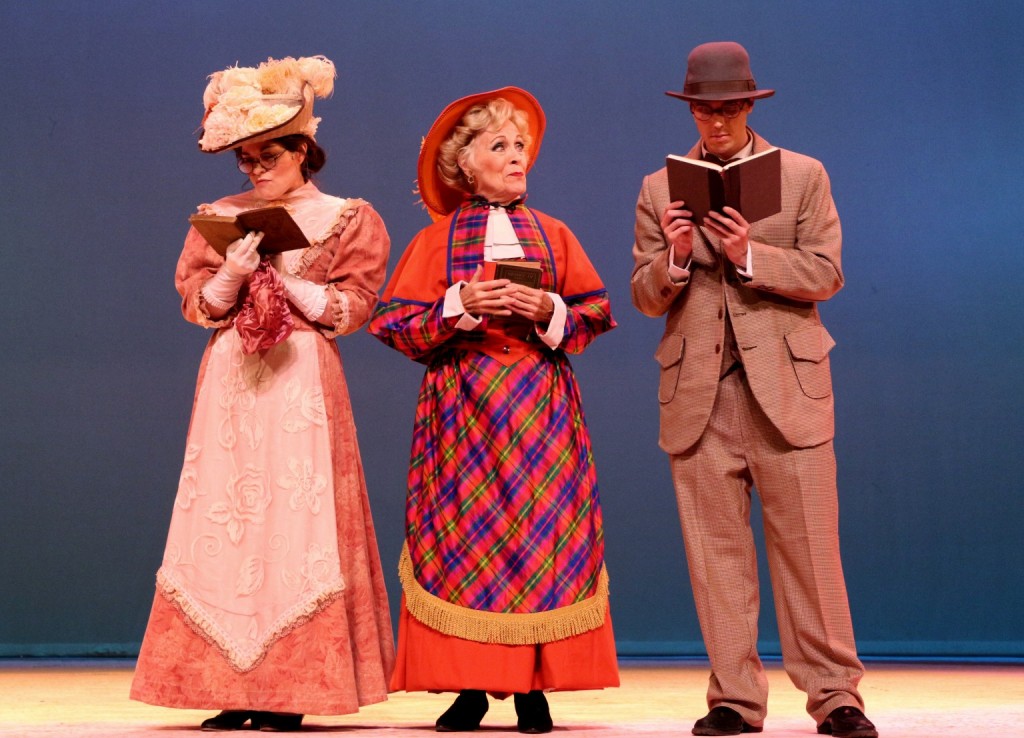 Dolly Levi has matchmaking skills beyond compare. And besides finding the perfect mate, she also re-bones surgical corsets, re-plugs pierced ears, and arranges short-distance hauling, among other things.

Though not laying claim to all those accomplishments, a fellow cast mate and I can be proud of our matchmaking abilities.

James Riley (Rudolph and ensemble) has a few great stories about two accidentally successful matchmaking episodes. We’re changing some names so as not to embarrass the parties involved (noted with *), and keeping others (noted with **). In James’ own words:

“One summer I was with a group of about 12 college students who were working with churches. Joe* was crazy about this one girl but as often happens, she did not even notice him. He kept asking my advice. At the same time, Mary Ann* told me she was crazy about Joe, but he did not even notice her. Finally, Joe made his move on the other young woman and was shot down. Oh, he was so depressed! And it was hard because they still had to interact somewhat every day. He kept saying he’d never date again and was giving up on women. And, he also mentioned how supportive Mary Ann was being. But, he was totally clueless (men!) to any motive she might have other than a friend. So, one day I asked him “why not Mary Ann?”  He was surprised, very surprised! ‘Oh, I don’t think she likes me like that.’  I suggested she just might. I thought I maybe saw some signs there. You would not believe how quickly he perked up in that moment (‘it only took a moment’). He asked her out that day and they have now been married for 34 years and have three girls.

The other involved Herb* and Noelle* a few years later. Herb was a divorcee, nearing 30 years old and he had a spiritual renewal and became involved in the church Noelle (about 22 at the time) and I attended. A year earlier I had asked Noelle out and she would not even go out on a date with me. She nipped it in the bud, gently and kindly, but firmly. We remained friends and part of a good-sized group of single adults. I notice Herb and Noelle spending more and more time together. One night Herb and I were leaving a home-based Bible study together and I asked him about Noelle. He said he really liked her, but he was self-conscious about his previous marriage. He thought Noelle would want ‘her own’ man, not one that had been with someone else (men!). I asked him if he talked to her about it. He said no. I suggested first that I saw the way she looked at him and I would kill to get that look from her. Second, I told him every relationship is a journey (or something like that). If things are going well with a couple, you keep going to the next step and the next. Frequently, one or the other will decide it is not working and it has gone as far as it will go and they will end it (sometimes they both do). But, every relationship has its challenges and each person has to decide if the challenges are worth facing together and going on to the next level. I told him to go for it and see where it leads. It might not work, but he would never know if it would work unless he tried. They have been married for 28 years (or so) and have one son.

One funny thing about these two stories is how much I often told others they should not be matchmakers! I hated it when I saw others doing it. Looking back, I probably just felt left out; until I met Kelly**, that is!”

Great stories, huh? I must admit, if I ever need help in that department I’m going to go to either Dolly or James, that’s for sure.

As for me, senior year in high school we had a Hawaiian-themed party. It was fun, as most parties were. I went to Notre Dame and the guys were mostly from Christian Brothers High School. A cute guy, Bill**, approached me and we talked a while. He finally asked me if I’d like to go to prom with him. I told him that unfortunately I already had a date, but that my friend Donna** didn’t. I introduced them that night, and they just celebrated their 50th wedding anniversary. A true match made in heaven (and at a high-school party).

Indirectly I made a match for my daughter, too. I was on a Midwest Express flight with a gorgeous young man named Pete** who worked for a huge printing conglomerate in Milwaukee (where I also lived at the time). I arranged for him to give my daughter a tour of the place because she was looking for an internship. At the time she was majoring in mechanical engineering. So they emailed and decided to meet for breakfast at 7 AM. She didn’t get home until noon. Jill ** told me about the place and what she enjoyed about it all. I interrupted to ask, “But what about Pete? Wasn’t he cute?”

She replied, “He’s okay. But I really liked his co-worker, Todd**.”

She and Todd have been married 20 years.

So it seems that, even accidentally, James and I have the “Dolly” touch.

It’s So Nice To Have You Back Where You Belong>>