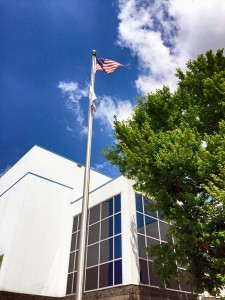 This week, we celebrated America’s Independence Day on the Fourth of July. It is perhaps one of the only days of the year where most people set aside their political posturing and opinionating and celebrate that we are all Americans and that no matter what may divide us, this shared history and freedom still unites us. Whether we’re cooking out on the back deck with family, watching kids catch candy in our town’s parade, or sitting somewhere along the Mississippi watching fireworks, we take a few moments away from the craziness of the world around us and embrace this uniquely American tradition.

I don’t know about you, but I could use a few more days of the year that remind me of the good things, and HELLO, DOLLY! has it all. It’s colorful, funny, and there’s even a parade! The show gives us a glimpse into an earlier time and makes us smile. It’s a very American story with its setting being in Yonkers, New York, and New York City. The names of the characters could have been the names of your neighbors a hundred years ago, and if you grew up in rural America like I did, your town probably had (and might still have) its own equivalent to Vandergelder’s Hay and Feed.

When people talk about HELLO, DOLLY!, they will often refer to it as an American Classic, and it is. A classic, according to my dictionary, is “an outstanding example of a particular style; something of lasting worth or with a timeless quality.” From the time HELLO, DOLLY! came to the stage, it has captured the hearts and imaginations of generations. Whether it’s the sarcastic grumpiness of Horace Vandegelder or the clever “arranging of everything” that Dolly Levi lives for, or the starry-eyed Ambrose and Ermengarde, you can find yourself in the story. How many of us have dreamed of our first kiss (even if we’re secretly shy), or were terrified to learn to dance? And who doesn’t find themselves captivated imagining themselves making a grand entrance like Dolly does at Harmonia Gardens?

HELLO, DOLLY! gives its own nod to American history and patriotism in the Motherhood March. The song is designed to distract Horace from discovering that his two clerks, Cornelius and Barnaby, aren’t back in Yonkers running his store, but are instead, in the very same hat shop where he is. The song plays on his patriotic sentiments with lyrics such as “Take off your hat, sir, while your country’s flag is passing,” and “Do you see him at Gettysburg, ‘neath that great triumphal arch? If you see him as he’s trampling through the grapes of wrath, stand up and march, march, march!” and “Remember the Alamo!” The song jumbles together a number of unforgettable moments in American history ending with Lincoln’s “Four score and seven years ago,” and “Damn the torpedoes, full speed ahead!”

Perhaps Bette Midler said it best in her Tony Award acceptance speech for her role as Dolly in the recent revival of the show: “Revival is an interesting word. It means that something is near death and it was brought back to life. HELLO, DOLLY! never really went away, it has been here all along. It is in our DNA, it’s optimism, it’s democracy, it’s color, it’s love of life, it’s hilarity. This is a classic, come and see it!”