During the summers of my college career, I worked at an aluminum die casting factory in Monroe City called Kuhlman’s Diecasting. I mostly operated a trim press machine trimming aluminum waffle plates that would later become the major component of a Presto Waffle Maker. The job was not hard as the machine did 90% of the work. But that machine in the early 1970s could not think for itself. This is where the other 10% came in. It was my job to see that the recently cast waffle plate would rest on the trim table correctly so that when I pulled the lever, the hydraulic press would trim the plate into a perfect square waffle mold. My supervisor never shared my unique idea of developing a trapezoidal waffle from my occasional miscues. His orientation message; his inspirational messages; his performance evaluations; even his talk while giving you a paycheck all contained the same message: “Just like in golf, and just like in life, you gotta keep your eyes on what you’re trying to hit.”

Well, I put that advice in the same spot in my brain as the advice from my math teacher. “You may not think so now, but you’re going to use Algebra all your life!”

Yeah, yeah my math teacher was correct. I did wish I paid better attention in math class, because knowing algebra better would have made some of my problem solving easier. I never really embraced that other piece of advice however…until recently. 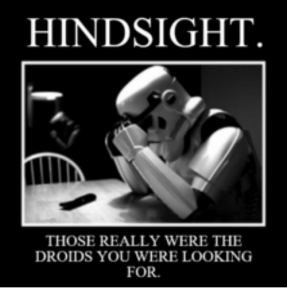 I have been consciously and sometimes unconsciously trying to perfect that wonderful problem solving tool called “Hindsight.” Now, hindsight often gets dismissed as a sub-standard problem solving tool. It was even ridiculed in one those cynical Star War posters. But I’ve recently reached the age where trying times call for timing tries. Timing the number of tries I’ve tried has resulted in me bringing hindsight highlights to the forefront.

I know! Why didn’t I think of that earlier? Bob Seeger, my philosopher of choice this time, laments in his song “Against the Wind”: “Wish I didn’t know now what I didn’t know then.” And of course Bob Dylan in his song “Back Pages” totally accepts the notion of using hindsight to enhance his wisdom today. “I was so much older then, I’m younger than that now.”

And…you are wondering the point of this very hard to follow disjointed missive?

I am in the musical, HELLO, DOLLY!. Way to go, me! Now, I’ve acted in many plays and some musicals in the past, so there really shouldn’t be any real issues, right? Yeah, well AARP just sent me a 15 year anniversary card. Issues are starting to happen, ok? The issues? Singing, dancing, remembering lines and blocking. Everything else about this gig is pretty easy.

How do I get through this; What is in my toolbox? I asked myself last weekend while eating one of those wonderful breakfasts at the Joliet Hampton Inn. Then it came back to me! The smell of waffles! Waffle molds! Trapezoid Waffles! Waffle Makers! Kuhlman Diecasting! Advice!! “Just like in golf, and just like in life, you gotta keep your eyes on what you are trying to hit.”

In a couple of weeks, the QCT stage will once again be filled with new and seasoned actors—all looking forward to telling the story of HELLO, DOLLY!. Put your precious hindsight to use proactively, come enjoy this show!  You know you would have wanted to!

And, hey! Stay cool and stay careful out there!