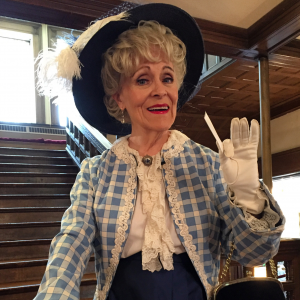 If you’ve been around musical theatre very long, you’ve undoubtedly heard of HELLO, DOLLY!. The musical first opened in 1964, winning 10 Tony Awards, including Best Musical. The show became one of the most iconic Broadway shows of its era (the latter half of the 1960s). It ran for 2,844 performances and was the longest-running musical in Broadway history for a time. Since 1964, the show has enjoyed four Broadway revivals as well as international success, and was also made into the 1969 film HELLO, DOLLY! that won three Academy Awards.

Before there was HELLO, DOLLY!, there was The Matchmaker, a play written by Thornton Wilder which was a hit with audiences and was eventually made into a 1958 movie. It is on this play that HELLO, DOLLY! is based. A similar story about a meddlesome widow, who plays matchmaker to several couples (as well as herself) in a big city restaurant, was also featured in the 1891 hit musical A Trip to Chinatown.

If you’re a newcomer to musical theatre, or perhaps a bit young to be familiar with HELLO, DOLLY!, you might be wondering, just who is Dolly? Let me introduce you.

Dolly Levi is a charming widow in her middle years who has decided to start her life again. She is also a self-proclaimed matchmaker and meddler. She makes it her business to meddle in everyone else’s business. Her business cards claim she can reduce varicose veins, give guitar and mandolin lessons, and several other talents, but her main occupation is as “a woman who arranges things.” She’s strong-willed and opinionated, an opportunist who loves life. Horace Vandergelder, a well-known business man and half millionaire, hires Dolly to find him a wife—only she determines to marry him herself.

Dolly is strong and commanding, but she’s also compassionate and vulnerable and captures the hearts of everyone who knows her. Chris Jones, in his review of the recent revival of the show, wrote, “Take, for example, the famous scene with the title number, wherein an old widow from Yonkers causes an entire collection of waiters to take up a gallop, the room swaying with a favorite song from way back, just by showing up at the front door.” She may be a meddler, but she’s a beloved meddler and she speaks to something deep within all of our hearts. Jones captures this as well: “When Thornton Wilder created Dolly Levi, he was building a satirical character designed to sit slightly off-center in a work arguing that practicality and stability have their crucial places in life, for sure, but that if you don’t have a few big nights out at the Harmonia Gardens (or your local equivalent) then that parade surely will pass you by, pal. And you’ll be dead before you know. A man of balance and cosmic awareness, that Wilder.”