QCT SPOTLIGHT: The Drinking Group with a Theatre Problem 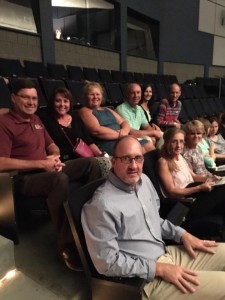 Nothing is more fun than coming to a show with your friends. Just take a look at one of our largest Season Ticket groups: “The Drinking Group with a Theatre Problem.” We caught up with Kat Roderick, a member of that group, to find out how they got started…

Q: Hi Kat! Can you introduce yourself to your readers?

A: My name is Kat Roderick. I love musical theatre and singing. I’m married to Hugh Roderick and have four kids. I’ve been involved with QCT for 25 years both performing and volunteering. Other members of our group have also been involved in similar ways.

Q: How did you group meet?

A:  We met about 12 years ago. Our children were attending St. James Lutheran School and we started a fundraiser. We met to go over some things while our husbands were “having their own meeting.” That’s when it all started.

Q: You have such a funny name! Where did it come from?

A: Carolyn is really the brains of the group. I think it might have started with the “Theatre Group with a Drinking Problem,” which was especially appropriate when we had to miss a year or two and just had a drinking problem. HA! Our name, though, is officially “The Drinking Group with a Theatre Problem.”

Carolyn: I think it was Scott Koontz who initially coined “The Drinking Group with a Theatre Problem.” 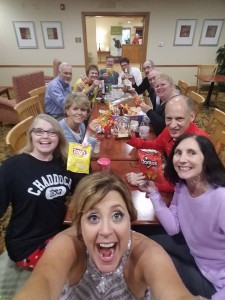 Q: How did you decide to start coming to the theatre together?

A: We found out that Carolyn, Karol, and I all have theatre in common. We decided to invite our husbands to join us for a show. Now, some of our husbands were a little leery so we went out for dinner and drinks to persuade them to join us. Over the years, we invited more friends to join. We get together once a month, with different couples taking turns each month to make plans. We’ve grown to six couples.

Carolyn: Initially we asked a few friends to join us to see Mia in PINOCCHIO (I think…) which was her first QCT musical. After that we got a group together to buy tickets. Our first season, first show was I DO! I DO!.

Q: Why do you keep coming to see shows together?

A: We enjoy being together. We’ve done getaways, watched our kids grow up, have been there for each other when loved ones have passed away, and supported each other in times when we needed each other. And, well, we love theatre. So why not??

These nights are important to us because they give us an opportunity to get out of the house, be together, and catch up on our lives. Life is often so busy that we need that time away to just laugh…and laugh is what we REALLY do…

Q: What is your all-time favorite memory with this group?

A:  My favorite memory is when they came down for my daughter’s wedding in St. Charles last year. Everyone knew how stressed I was the year of planning. They all made the trip down, we stayed at the same hotel, and they supported me and my husband during this special time in our lives. It means a lot when people you love support you. And it was fun getting away together!

Carolyn: Other than Kat and Hugh’s daughter’s wedding, the night after a show when the whole crew wondered over to Drake’s for “Fireball Friday.” It was one of those rare nights when we had the kind of laughs that define a friendship for years. It was the kind of thing where one person says one word and everyone starts laughing.