Mothers, Daughters, and the Five Ladies 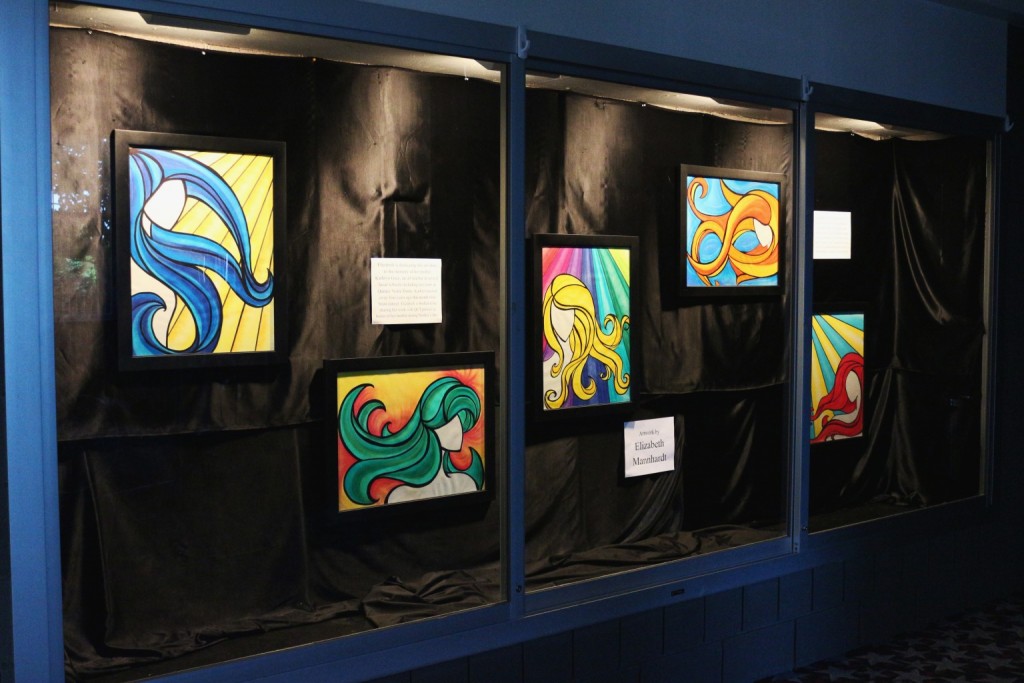 If you’ve been following this blog over the last few posts, then you know that the central theme of THE DIXIE SWIM CLUB is friendship, specifically the friendships of women. Perhaps one of the greatest and most significant friendships of most women’s lives is the friendship between mother and daughter. The women of DIXIE all have mothers and all have feelings about motherhood, whether they are mothers or not.

When you arrive for the show this weekend or next, you will want to stop by the South Door lobby display case and take a look at the art installation by QCT’s own Elizabeth Mannhardt. Elizabeth has been involved with QCT since childhood, and in recent years she has been the Vocal Director for MARY POPPINS, LADY WINDERMERE’S FAN, SISTER ACT, and the upcoming summer musical HELLO, DOLLY!. You will also remember her from her onstage role as Guenevere in last year’s production of CAMELOT.

Elizabeth had a very special mother, and it is to her that these pieces are dedicated. Elizabeth’s mother, Kathryn Gray, was an art teacher in several local schools including Quincy Notre Dame. Kathryn passed away four years ago this month from brain cancer. Kathryn was an inspiration to many. “Her gift was always to nurture people,” Elizabeth told me. “It was never about being the best artist in the class; it was about her inspiring them to believe that they had the ability to do more.”

Elizabeth remembers: “Growing up, Mom never allowed us to have a coloring book, and we also didn’t watch movies. Someone gave me a Disney coloring book for my birthday when I was seven or eight years old, and because it was a gift from someone else, she allowed me to keep it. But, because I didn’t know that Alice from Alice in Wonderland had a blue dress and blonde hair, when I colored the picture, I colored her with black hair and a pink dress. Mom and I would joke about how in so many of my designs, you have these really strong black lines that are filled in. It’s like my revenge on the coloring book, that I was creating these sort of ‘coloring book-esque’ designs. I don’t want people to necessarily see that when they see the artwork, but it was kind of a joke between she and I.”

Elizabeth and her mother went to art shows all the time. “I remember one time in high school, we were in Chicago, and there was a look, a design, something I was missing whenever I went to all these shows. There was something I wanted to see, and I wasn’t seeing it. I’d look through her art books and study the works of many artists, but I just wasn’t seeing it. Finally, Mom just said, ‘Well, Sis, maybe you’re supposed to draw it.’ So I started drawing in pastels. There’s something about getting your hands in it, using your fingers, and pastel affords you those really, really bright colors. I started on this really intense journey of drawing and in, like, a month, I did hundreds of drawings. Finally I was seeing those drawings that I wasn’t seeing anywhere else.” She told me how she would stay up late working on her drawings and then when she got up in the morning, her mom would have left encouraging notes and comments on her work. These are notes she treasures to this day.

So who are the women in the drawings? “Every time, I’m drawing myself, I’m drawing my mom, I’m drawing every woman I’ve ever met, I’m drawing the women we could be, or long to be.”  Elizabeth has titled her five-piece collection “The Crown of Creation.” The work captures the depth of women, the curve, the feel of wind in the hair, the posture of the head and the direction of the head or even the color of the hair that tells a story or gives emotion.

Elizabeth hopes her work will give the viewer an opportunity to contemplate how their own life has been impacted by a woman, whether it’s a mother, a sister, a friend, or a teacher. “I hope that the work empowers women, but doesn’t just say ‘charge, fight, assert yourself;’ it’s not about that. It’s saying there are so many layers and there are so many depths and levels, and even the frightening places, even the tender places, and even the broken places have validity and have value and can be beautiful.”