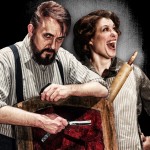 [Be warned; the following contains spoilers for SWEENEY TODD!]

I’ll admit it; I don’t like horror movies. I’ve tried. I’m the person who squirms at every suspenseful chord or jump cut. I get queasy at the sight of blood. Over the years I have paid movie theaters a lot of money for the privilege of watching a film through my fingers.

“But Kelsey,” horror buffs tell me, “What about Psycho? What about The Shining? What about the many well-crafted and beloved films within the horror genre?”

However, even with my lack of enthusiasm for horror, I am really looking forward to seeing QCT’s upcoming production of SWEENEY TODD.

[SPOILER ALERT] Sweeney Todd is about a barber who goes on a killing spree and turns his victims into meat pies. But don’t let that throw you. SWEENEY TODD also includes one of the most complex, dazzling, and haunting scores that’s ever been written for musical theatre. I can’t wait to hear our singers and musicians tackle it. The script itself is gloriously witty; one song in particular has so many quick and clever rhymes it will leave you breathless.

The main reason I’m looking forward to the show is I know it will make me ask some major questions. Will I feel badly for Sweeney’s victims – even the ones who are less than moral? When presented with the show’s clever humor, will I laugh in the face of a story so bloody? Will I be able to feel any empathy for Sweeney as he commits his heinous acts? What do I think could drive a person to that kind of darkness? Can a person who does such things be redeemed?

These questions are uncomfortable; even just for me to type. I’m glad I get the opportunity to evaluate them from the safety of a theatre seat. That’s what good theatre does; it makes us ask questions and consider experiences outside of our own.

Not every story is for every person. When my students ask about the show, I tell them “it’s for grown-ups”, because it is. Though my students show great emotional intelligence, I wouldn’t wish the show’s complicated questions upon them. Not just yet. For adults, though, shows like this one are an opportunity to reflect and take away the message of your choosing.

[SPOILER ALERT] SWEENEY TODD and his cohorts definitely have to face the consequences of their actions. To me, the piece is a cautionary tale about what happens when you give into your darker impulses. I imagine other audience members will take away their own lessons. That’s a good thing.

If you’re reading this and are thinking that SWEENEY TODD doesn’t seem like a show for you, I support you in that choice. I hope you’ll come see another show this season; each one is unique and will require different questions. I’m sure we’ll have something more to your liking.

If you’re reading this and you’re not sure if SWEENEY TODD is a show for you, I’d refer you to Mark Twain. He says, “The man with the new idea is a crank until the idea succeeds.” Come to the show anyway. See if its ideas succeed for you. If you don’t like it, that’s totally okay – I’ll loan you my Muppet Show DVDs afterwards.