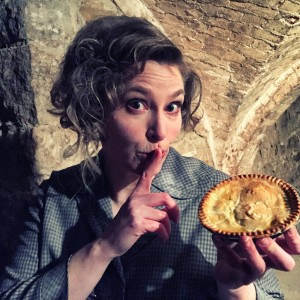 Gretchen Wolfmeyer hasn’t been with QCT a year, and yet she feels like she’s always been a part of the QCT family. If you’ve been lucky enough to meet her, you know she’s a bubbly and friendly presence! So how did she come to play one of the most notoriously wicked characters ever written? We caught up with her to find out…

Q: Tell us a little bit about yourself, Gretchen.

A: I’m originally from Mayville, Wisconsin, a small town in the southeastern part of the state. I met my husband Randy in 5th grade when he and his family moved from Quincy, IL to my hometown. I had always heard stories about Quincy and first visited before we got married 19 years ago. We moved to Quincy in 2011 with our two kids, Thalia and Conall. I work as an Office Administrator at Our Redeemer Lutheran Church where we are also active members. When I’m not active at the theatre, I enjoy playing board games, watching old movies, listening to NPR, and drinking way too much coffee.

Q: Why did you decide to audition for SWEENEY TODD?

A: I was intrigued by QCT’s production being set in the 1930’s. I am a big Alfred Hitchcock fan and love his early work. In my head, I could picture the show done in a Film Noir style and that’s when I knew I just had to audition.

I have been entranced by Sondheim’s music for Sweeney Todd for quite some time. My first Sweeney experience was seeing the 1982 telecast of the show starring Angela Landsbury and George Hearn. I thought it was cool and pretty crazy, but I’m not sure I really understood it. Since then, I’ve watched just about every production and concert version I could get my hands on. Once you hear Stephen Sondheim’s chilling music, it is difficult to get it out of your head.

Q: What was it like finding out you were going to play Mrs. Lovett?

A: I was really excited! This role is a dream come true for me and a once-in-a-lifetime opportunity. I usually play supporting character roles, but Mrs. Lovett is the ultimate lead character role! To be able to create my own version of a character that has been played by the Who’s Who in Musical Theatre (Lansbury, LuPone, O’Connor) is a real honor. I’ve never been so happy to be middle-aged!

Q: Who is Mrs. Lovett to you? How are you alike? Different?

A: Mrs. Lovett is cheerful, over sharing, calculating, amoral pie entrepreneur. She’s delightfully flawed and interesting. You could argue that she is the true villain in our cautionary tale. Forever the optimist, she makes the best of every situation. And given her situation, that is pretty messed up! She’s so obsessed with Mr. T that she will do everything possible to keep him by her side.

I tend to be cheerful, optimistic, and have always loved serving customers at a busy restaurant. We are all flawed and sinful human beings, so who am I to judge someone else? Mrs. Lovett and I do have different…hobbies? (I don’t want to give our story away!)

Q: What is your favorite part about playing this role or about being in this show?

A: I’ve really enjoyed Sondheim’s beautiful music, his tricky tongue-twisting lyrics, and the comedy that this role brings to our dark tale. Our end of Act I song, “A Little Priest” is my absolute favorite.

I get to stop my workday, hug my family, and go play with the most talented people in the Tri-State area! I really love listening to my cast-mates sing. Working with Scott Schoonover (from Union Avenue Opera Company in St. Louis) on his first QCT production has been an amazing experience — we are lucky to have him as a guest artist!

Q: What do you hope audiences take from this production?

A: The thrilling tale of Sweeney Todd has been around since Victorian times and is even older than tales of Jack the Ripper. Our cautionary tale shows what obsession and revenge can do to a person if left unchecked. I believe we tell this tale as a warning for all, but we also hope you enjoy the show and laugh some along the way!

Also, I hope audiences will take a chance on us and open their minds to something different. Musical Theatre does not always have to be happy and sugar-coated. The genre can be darker and still beautiful. I challenge each one of you to bring a friend who doesn’t usually go to musicals and bring them to see SWEENEY TODD. It may change their idea of what a musical is supposed to be.

Q: What should people know about this interpretation of the show?

A: Our show is not set in its usual time period, the late 1800’s, but is instead set in London in the 1930’s. If you’ve seen the Tim Burton movie adaptation of SWEENEY TODD, our show will not be gory like the movie was. Since we still deal with violent themes throughout the musical, we do not recommend this show for small children.

Q: Your first QCT show was last summer. What brought you to QCT and what has the experience been like thus far?

A: I had heard about QCT’s quality productions long before I moved here. Mary Griffith from WTAD had encouraged me to become a member right after moving to town when she found out that I had worked with my hometown community theatre. My kids took classes at QCT and loved the experience! After they got a little older, I was able to audition for SISTER ACT.

I have loved the diversity of roles during my QCT experience. In SISTER ACT, I got to play a backup singer, Christmas shopper, bar patron, a crazy garbage can lady, community helper, and a dream-scene dancer all in one show. In A WRINKLE IN TIME I got to play one of my storybook heroes, Mrs. Who, and got to share the stage with my son. We were the oldest and youngest cast members in that show. Playing Mrs. Lovett is just gravy after those two!

Q: How do you hope your QCT story continues?

A: I am open to trying new things, so I hope my story continues on stage and behind the scenes. After SWEENEY TODD is over, I’d like to help out behind the scenes with the interactive QCT Children’s production of 20,000 LEAGUES UNDER THE SEA. It is such a cool idea that I can’t wait to see this production come to life!

Q: What would you say to someone new to town who, just like you, wants to be involved?

A: They should absolutely open themselves up to the experience. Go in with an open mind and active, listening ears. Check out the guidelines for auditioning on QCT’s website and then pick a song that isn’t from the show. Challenge yourself and you will not be disappointed. Most of all, have fun and make friends!

I’ll leave you with a quote from the great Angela Lansbury, the original Mrs. Lovett, that sums up my thoughts as well: “Work in the theatre just keeps revitalizing me, it keeps giving me the excitement and the fun of something new coming up and that’s a great gift.”