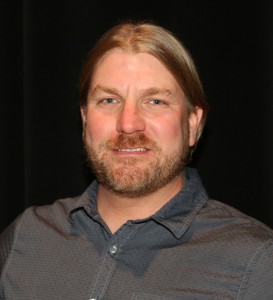 Andy Caley is probably one of the nicest guys you’ll ever meet. It only makes sense, then, that we made him play a horribly mean character. We caught up with this nice-guy-turned-villain to learn more about him…

Q: Tell us a little bit about yourself…
A: My name is Brian Andrew Caley, though I’ve been called Andy since birth. I am 37 years old and own and operate Caley Custom Construction, Inc. I have been married to my best friend Dana for 17 years. We have four children Isabella, Christian, Josh, and Gabby. We enjoy local and global Christian mission work.

Q: How did you first become involved with theatre?
A: I had a strong love for theatre and the performing arts as far back as I can remember. However when I was a child we were very poor and the theatre seemed out of reach. I took drama in high school, but was crippled by stage fright and insecurity. Thankfully throughout my adult life several people encouraged me to consider theatre, and at 37 years old Mindy Keller suggested auditioning for PETER AND THE STARCATCHER and so here we are.

Q: Can you tell me what inspired you to start your QCT story?
A: I’m sure there are many who will read this who come from different faiths and philosophical world views. I am a Christian and strongly believe that God’s hand leads us on our way. I truly consider my QCT story a blessing. I must say it has been instrumental in expanding my perspectives of life and I have learned much about perseverance.

Q: Were you familiar with the Peter Pan story before you auditioned?
A: I was very familiar with the Peter Pan story before auditioning. It was a very significant story to both my wife and me. Growing up we were both very much spiritual orphans and thankfully made it through our childhood struggles to raise children of our own. The reality of life is at some point we will all become orphans, and sadly many of us grow up to be pirates, so Peter Pan and his home in Neverland are very close to many of our hearts. It has been an emotional joy to consider the beginning of the story and also to be apart of it. 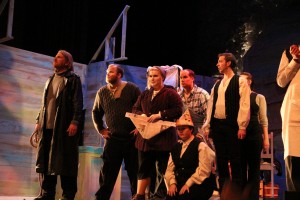 Q: What has the onstage experience been like?
A: At first I was so anxious I tried to walk out on the audition. (that is an incredibly funny story, maybe someday I can tell you about that) Thankfully, as I was almost out of the door, Brandon Thomsen stopped me and shepherded me into reading a line. I was called back for a second reading the next day and must say it was one of the greatest times of my life.

Q: Can you tell me about Bill Slank and who he is to you?
A: Bill Slank is a mean-spirited, selfish man. He shows no signs of mercy to his fellow man or remorse for his sins. He is, however, like so many of us in our selfish pursuit of individual security and power. Like so many of us he was abused by the world and so has grown to become an abuser.

Q: How do you find yourself similar and/or different to Bill?
A: I, much like Bill Slank, experienced much suffering in my youth. I too, like Bill began my young adult life willing to do anything to distance myself from poverty and weakness. Thankfully I ran into God fairly early in my story and he’s been changing my heart ever since.

I think we all have moments of selfishness that govern our decisions. I hope the older I get the more my decisions are not based on selfish ambition, but on serving others. I think that way of thinking is very different than Bill.

Q: What about your other characters? What is it like playing multiple people—and things?
A: The other characters I play are narrators, pirates, and mollusks, a tribal people in the jungle. It is a great challenge for me to simply be in a play playing one character, but the other characters stretch me beyond what I thought I would have thought I could do. Thankfully at QCT I have great coaches and everything is coming together nicely. I am grateful that all of my characters aren’t as out front as Bill Slank, considering this is my first time on the stage. 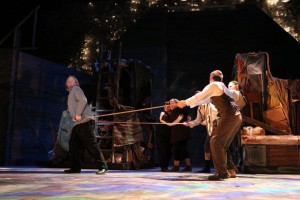 Q: What makes you excited to be a part of this show?
A: I am excited because the cast is so talented. It is amazing to watch them all become these characters, and I am truly entertained by their storytelling. There is truly some heart warming moments that touch the depths of the heart, as well as bursts of laughter that will leave tears in your eyes.
The play is amazing in and of itself. The story is magical and funny and takes the audiences aboard ships in the imagination. Along with the exquisite story comes an amazing cast that has worked very hard to capture the vision of the author. As a builder for the last 20 years, I can speak to the time involved in building a house. A good sized home takes approximately 2000 man hours to build and nearly 4 months. We as a cast will have collectively put in over 2000 onstage, not to mention the hundreds of hours behind the scenes. This is truly a performance worth seeing!

Q: If you could say one thing to the audience, what would it be?
A: Let your imagination be your guiding light during the performance.

Q: How do you hope to continue your QCT story?
A: With all my heart. I deeply love the people here and hope to spend more time with them!

I would encourage anyone to try out. I was as anxious as a person could be and inexperienced. If I can do it so can you! Life is full of choices and being a part of QCT is one everyone in our community and surrounding should consider. You never know which way the wind will blow you but you have to first set your sails.

Read blogs about the show…