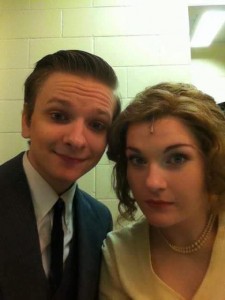 Love is unpredictable. That’s what I love about Almost, Maine. It speaks such high volumes to the challenges and spontaneity of love.

Unpredictable love is exactly what I experienced. It sneaks up on you when you feel like everything is going fine, and no matter how much you resist it, you eventually are doomed to give into it.

So here’s the backstory I know all of you have been dying to hear.

Wesley and I first met after a performance of Godspell at QCT. He approached me, took my hand, kissed it, and introduced himself as, “Wes Friday: teen heartthrob.”

I was not impressed.

Throughout the next year, we did three shows together: Peter Pan, The Wizard of Oz, and The 25th Annual Putnam County Spelling Bee. Our friendship grew stronger with each show, and by the end of Spelling Bee, I considered Wes to be my very best friend.

Looking back on that spring, we did an awful lot together. We saw movies, played putt putt golf, and we were constantly joking around.

I recall one time, we went to see a movie and Grant Farmer came along with us. He said something to the extent of, “so are you guys like a thing now?” Wes and I both laughed at the thought of that even happening.

After Spelling Bee, I helped him through a break-up. On my break from work, I would go over to his house to hang out. He felt like a brother to me.

I didn’t ignore him. I still went over to his house on my breaks from work, and we continued hanging out as usual. After an entire summer of Wes pursuing a romantic relationship, it hit me. I was in love with him.

It just didn’t seem right to me though. We were best friends, and as one of the characters in Almost, Maine says, “That’s a thing you don’t mess with!” 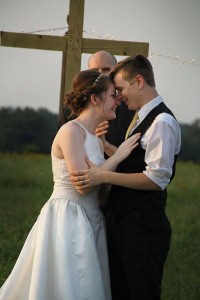 I took a chance though, and I am so glad I did. After almost one whole year of marriage, I can honestly say that being best friends with my husband is the greatest thing. It makes things so much easier. We enjoy a lot of the same things together (except superheros- I’m still warming up to that) and most of all, we have fun.

It was completely unpredictable, but I wouldn’t change a thing about what happened. It makes for a good story.

Love in the Time of Wedding Planning>>